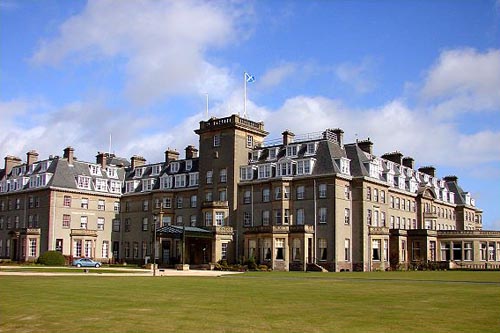 Five star hotels:
Scotland has been popular with royalty and the rich and famous for hundreds of years. Whether for country pursuits in the highlands, golf at St Andrews – birthplace of the modern game, or visiting the cities of Glasgow or Edinburgh, Scotland has luxury hotels to match. One of the original and best known is The Gleneagles Hotel in Perthshire, perhaps the most famous of the 5 star hotels in Scotland. The hotel’s world-class facilities and remote location in the foothills of the Scottish highlands were some of the reasons it was chosen to host the G8 Summit of world leaders in 2005, and its famous golf courses have been selected for the 2014 Ryder Cup.

Whisky:
Scotch whisky has to be Scotland’s most famous international export? To be rightfully called Scotch, the spirit has to be aged in oak barrels in Scotland for a minimum of 3 years. Malt whisky can be blended from different distillings of malt barley, but for purists it has to be Single Malt – pure unmixed whisky from one of the many distilleries around the country, each with their distinct favours. Aging in oak barrels develops the taste and the length of time allowed for this adds both interest for the connoisseur and naturally, the price paid for a dram… With prices for a 55 year old single bottle from a famous distillery such as Macallan reaching $25,000, Scotch whisky really is one of life’s luxuries!

Food:
Scotland is a popular destination for fine dining. In the cities of Glasgow and Edinburgh, recent years have seen a huge growth in excellent restaurants offering a regional variation on the vogue for Modern British cuisine. As in London and other UK cities, the modern trend for regional fine dining, using the finest locally-available ingredients has really taken off in Scotland. Utilizing a choice of excellent fish and seafood from the shores around the Scottish coast, high quality meat and produce, and a heritage of traditional recipes; Scotland has some fantastic new restaurants rapidly gaining an international reputation.

Entertainment & Shopping:
Scotland’s capital Edinburgh hosts a world-famous arts festival annually in the month of August. The Edinburgh International Festival showcases performances from the world’s leading musicians and orchestras, and is a famous fixture on the worldwide performing arts calendar. For sporting fans, the annual rugby match between England and Scotland is a spectacular occasion that elicits passions based on the ancient rivalry between the unified nations. The luxury hotels of Edinburgh are busy during this popular time to visit the city. For those disinterested by sport, shopping may be an alternative attraction… Scotland’s major cities have an interesting mix of boutiques and major label stores, such as in Edinburgh’s St Andrews Square district. Scotland has a number of unique luxury products on offer, in particular very high-quality cashmere along with unique tweeds – perhaps most famously Harris Tweed, which has been woven on the Hebridean island of Harris for hundreds of years.