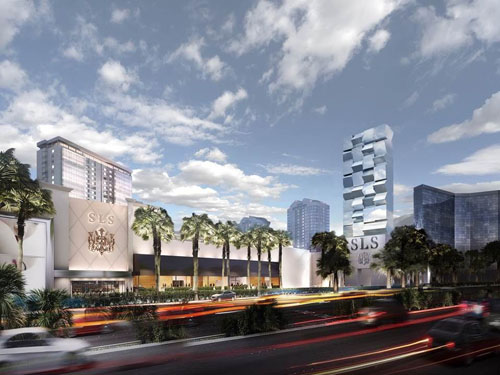 When the iconic Sahara Hotel & Casino finally closed its doors in May of 2011, many wondered what was next as the popular Rat Pack era hotel ended a mighty 59 year run in Las Vegas. Frank Sinatra, Dean Martin, Sammy Davis Jr, Joey Bishop, Peter Lawford and other Hollywood celebrities made it a famous Vegas hotspot.

Well this August, the transformation will be completed. The luxurious new SLS Las Vegas resort will open and once again and the world will take notice.

The new SLS Las Vegas resort will remind people of the Hollywood Boulevard and the Sunset Strip in Southern California, but will take on an ultramodern look and style.

The Sahara hotel & casino was not aging well, but after over $400-million in restoration and remodeling, the SLS Las Vegas will emerge as a luxury destination with more than 1,600 guest rooms and suites, plus numerous restaurants and nightclubs.

Sam Nazarian was quoted, “It’s been an incredible journey these past few years and I’m proud and humbled by some big news — SLS Las Vegas is officially opening Labor Day Weekend 2014. Looking forward to toasting the Strip’s next chapter with you! We are ‘back’ indeed!”

SLS Las Vegas becomes the first hotel property to open on the Las Vegas Strip in several years, so anticipation is extremely high.

Well known brands will be the norm at SLS Las Vegas. To start, there’s the reinvention of the popular L.A. nightspot – The Sayers Club. Also planned are incredible new restaurant concepts such as – The Bazaar by José Andrés, 800 Degrees, Umami Burger, Katsuya, Cleo, The Griddle Café and more.

As the excitement grows for the opening of SLS Las Vegas hotel, make your plans now and enjoy and imaginative mix of luxury accommodations and entertainment, all under a single roof.

To book a reservation at the new SLS Las Vegas luxury hotel, please contact The Life of Luxury and a travel specialists will assist you with all your itinerary needs.