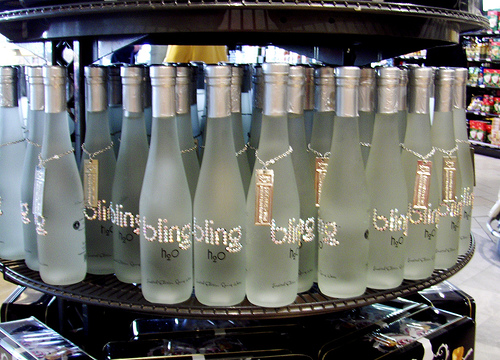 Just when you think Hollywood and our celebrities can’t get anymore ridiculous, the latest “hot item” story surfaces. And this one is all wet, literally. Introducing Bling H20, a natural spring water bottled at the source at English Mountain Spring against the exotic backdrop of Dandridge, Tennessee.

Yes, Tennessee… Not the French Alps like Evian, but Tennessee. Home of Pigeon Forge, Dollywood, and now Bling H20.

Nestled in the heart of the Great Smokey Mountains, Dandridge is the county seat of Jefferson County. Its most notable landmark is a large country club and golf course. As of the census of 2000, there are 2,078 people, 749 households, and 516 families residing in the town.

I am guessing not one of those 2,078 people has ever spent $30-$90 for a single bottle of natural spring water. I would imagine that you have to travel four hours or so from Tennessee to find people stupid enough to pay that price.

Bling H20 is in fact, more expensive than some very appealing fine wines. But it’s not about the water. It’s about the water’s vessel–and the supposed status symbol that results from being seen with it. Bling H20 comes in 750ml frosted bottles studded with sparkling Swarovski crystals. It is indeed as classy as a gold front tooth.

The fast-growing favorite of the Hollyweird crowd was earlier marketed just to simple-minded celebs and the self-absorbed socialite circle, but now you too can flash it about as long as your wallet holds out by ordering it through the Bling H20 web site.

Bling H2O’s founder, Kevin Boyd, a Hollywood writer-producer whose credits include “The Jamie Foxx Show” is the “brain” child behind the overpriced glorified tap water. Apparently having The Jamie Foxx Show on his resume wasn’t enough reason to be laughed at parties.

But soon, no after-party, dressing room, or celebrity gathering will be complete without a case or two of Bling H20 on ice. Paris Hilton reportedly was even seen feeding it to her dog. Right after the dog licked its own ass no doubt.

One sip of this trendy Smokey Mountain dew and you just might be able to answer the age-old question, “Does a bear shit in the Tennessee woods?”