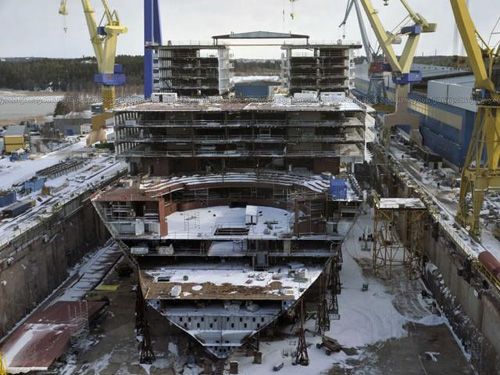 It’s the most expensive ship in history, and it’s longer, wider and taller than the largest ocean liner ever built, (Cunard’s QM II), 43 per cent larger in size than the world’s largest cruise ship, (Freedom of the Seas) and remarkably, bigger than any military ship ever built, aircraft carriers included.

In a world where choice of amenities count, Project Genesis has yet another trump card – in the the center of the ship is a lush, tropical park which opens to the sky.

With its intention of taking the best of the land to sea the aptly-named “Central Park” spans the length of a football field. The aim is to make the park a public gathering place like a town’s central park, with pathways, seasonal flower gardens and a canopy of trees.

Aiming to give the ship a number of distinct districts, the Central park neighborhood is one of seven neighborhoods to be unveiled on Project Genesis. Each neighborhood will provide vacationers with the opportunity to seek out relevant experiences based on their personal style, preference or mood.  Full article