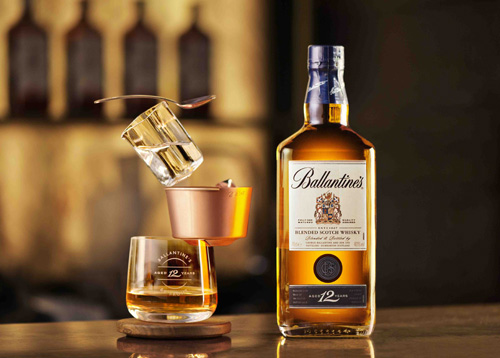 Ballance is the creation from the award winning, Swedish, female design trio of FRONT. Ballance is inspired by the elegant balance of the blend and proudly celebrates the craftsmanship in both whisky and design.

Ballance cleverly features a series of handcrafted objects which mysterially appear to suspend in mid-air. The reuslt creates one super-premium design collectible. Each element of Ballance has the Ballantine’s 12 by FRONT design collaboration elegantly burned, etched or stamped onto it so that they stand also alone as collectibles.

Sandy Hyslop is Ballantine’s Master Blender of scotch whisky and was quoted, “It was fascinating spending time with FRONT and exploring our shared obsessions with excellence and rooting contemporary relevance in authentic crafts. Ballance is as beautiful as it is functional – lending elegance and theatre to the serving ritual. With Ballance the ultimate aim is for whisky connoisseurs to discover their own perfect balance in enjoying Ballantine’s 12.”

Consisting of five essential items, Ballance creates the perfect serve of Ballantine’s 12. The interactive sculpture is inspired by the balance of flavours that will be discovered in the elegant whisky itself, as well as the artistry of the Master Blender.

A contemporary, elegant whisky glass balances a trio of pieces; a copper ice bowl, beautifully honed using copper in a tribute to the copper stills used to distil the precious whisky, a square shaped water jug, whose shape mirrors the silhouette of the Ballantine’s 12 bottle, and – precariously balanced at the sculpture’s summit – a copper spoon.

Ballantine’s 12 pays special homage to scotch whisky aging and mixing rituals. An example is both oak and copper are predominantly featured since these materials are key to realizing Ballantine’s 12 and the design appears to magically ‘balance’ in mid-air.

Ballance can also be deconstructed, allowing owners to delight their friends and use to serve Ballantine’s 12: each piece of the sculpture is a collectible in its own right.

There will be only 150 of the limited editions released worldwide, beginning at the end of October. The Scotch whisky product is the culmination of a collaboration between FRONT and Sandy Hyslop.

Each Ballance, Scotch whisky piece from Ballantine’s 12 will have a recommended retail selling price of £350 or equivalent (currency dependent).

To learn more about Ballance from Ballantine’s 12, please contact The Life of Luxury for further details.