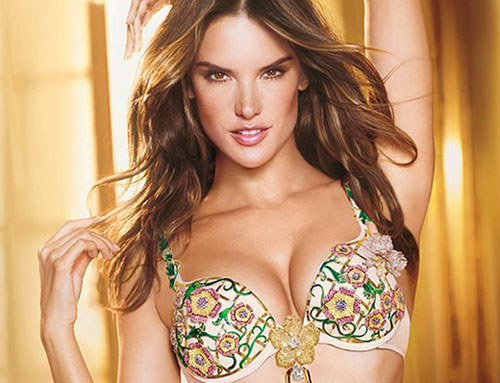 She has proudly adorned the patented angel wings but for this year’s 2012 Victoria’s Secret Fashion Show. Alessandra Ambrosio will add the most coveted gem to her outfit – precious diamonds.

The $2.5 million Floral Fantasy Bra that Ambrosio will wear comes with a matching belt that was created by London Jewelers.

This beautiful bra features a removable 20-carat white diamond that hangs in the middle plus includes over 5,000 amethysts, rubies, sapphires and gorgeous white, pink and yellow diamonds that have been arranged in a stylish, floral pattern.

When asked about the $2.5 million Floral Fantasy Bra Gift Set, beautiful model Alessandra Ambrosio replied, “I felt they made it for me. It’s very romantic. I’ve been waiting for this moment for a long time.”

You can see sexy Alessandra Ambrosio wear the $2.5 million Floral Fantasy Bra at The 2012 Victoria’s Secret Fashion Show, which airs on December 4 on TV channel CBS.