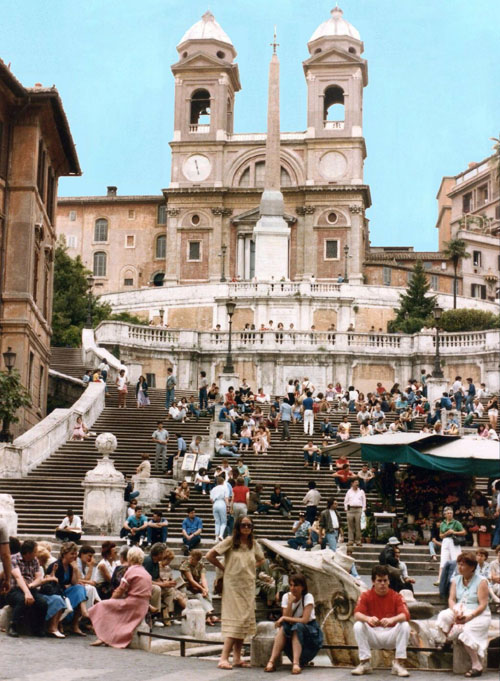 The romantic and mind blowing atmosphere of the famous Spanish Steps are one of the most popular sites and most visited areas in Rome.

Its 138 steps full of class and elegance, brightens up the square bringing life and energy to this great area. Built in the late 1700s, this area attracts and is still frequented by locals and tourists to absorb its magnificent atmosphere.

The Spanish Steps in Italian are called “Scalinata”. These are famous set of steps in one of the most well known areas of Rome. Despite of its name, the famous Spanish Steps were actually built by the French.

“Scalinata di Spagna” was built between 1723 and 1725 by tienne Gueffier, a French diplomat. It’s easy to recognize it at the Piazza di Spagna square rectangle like shape.

The Piazza di Spagna is one of the most popular tourist sites in Rome. The Scalinata is without a doubt the longest and widest staircase in all Europe.

At the base of the Piazza is the Early Baroque fountain called “La Fontana della Barcaccia” (“Fountain of the Old Boat”), built in 1627-29 by Gian Lorenzo Bernini. Legend has it that, Pope Urban VIII had the fountain installed after he had been impressed by a boat brought here by a flood of the Tiber river.

Bernini is said to have used the Boat as a sign of safety from floods from the Tiber River.

The steps are covered by pots of beautiful “Azalea” flowers in spring (flowering shrubs are part of the genus Rhododendron and subgenus Pentanthera), Romans named them “Garden Stairs”.

A sign that the Summer is fast approaching. The weather in Rome can get quite hot, even in the Fall. So the many cafes, shops and restaurants near the Spanish Steps are always popular full of people absorbing this fine, elegant atmosphere.

Eating on the stairs is forbidden by Italian regulations, anyway you will probably still see some people having a “tramezino” (Typical Roman Sandwich) and a cold drink when everything is calm and peaceful.

Spanish Steps turned into a meeting point and the place where to take a romantic or scenic ride in a carriage pulled by a horse. At the very first step to the right, is the house where John Keats (the English Poet) lived and died in 1821.

Today there is a museum open to the public dedicated to his memory, full of memorabilia of the English Romantic generation.

Halfway up on the right is where Bernardo Bertolucci directed Besieged (1998) and where The Roman Spring of Mrs Stone was filmed as well.

American singer/songwriter Bob Dylan refers to the “Spanish Stairs” in his classic “When I Paint My Masterpiece” (1971). Today modern terraces lay in perfect harmony with the surrounding baroque context.