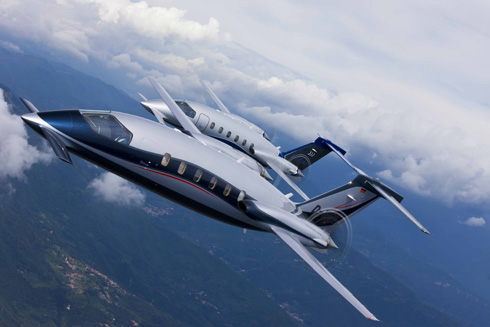 The new Piaggio P. 180 Avanti II, is a true category of luxury that combines both the speed of a jet with the fuel efficiency of a turboprop.

The combination of engineering and Italian futuristic design produces an aircraft that remains the fastest, quietest, most luxurious and environmentally-friendly aircraft in private aviation.

As the world’s fastest turboprop aircraft, the Piaggio P. 180 Avanti II has the speed of most light cabin jets, while offering the cabin of a super mid-size aircraft.

Cruising at speeds of more than 402 knots, the P. 180 travels quicker and quieter than most light class aircraft … yet has only a fraction of the fuel consumption.

Requiring approximately 33 percent less fuel than most business jets and nearly 25 percent less than most efficient twin turboprops, this smooth, high-performance aircraft will truly transform any trip into an amazing journey.

The aircraft is more than a means of travel. The  P.180 is a traveler’s safe haven for both comfortable and luxurious transportation.

Piero Ferrari transcends aviation and automobiles as one of the most authoritative ambassadors of Italian technology.

One of the most recognized logos in the world is the Ferrari’ “Prancing Horse”.  The symbol is proudly displayed on the Piaggio Aero P180 Avanti II and flown by the Scuderia. It is the only aircraft deemed worthy of carrying the Ferrari brand.