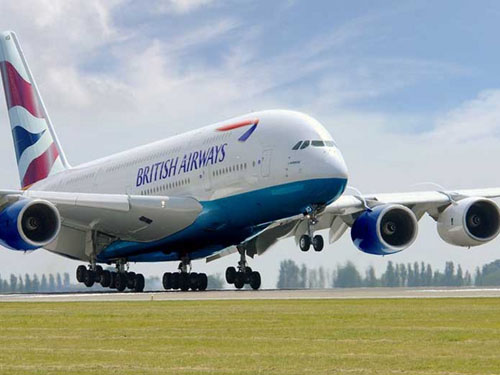 Uncomfortable seats is often ranked as one of the top airline complaints by travelers.  British Airways is here to change your travel experience and has announced the cabin design and layout for its Boeing 787 and Airbus A380 aircraft.

Only six months away from delivery, the new British Airways Dreamliner will provide comfort for 214 customers while the A380, the largest aircraft in the British Airways fleet, will accommodate 469 customers.  Elegant cabin designs fitted on British Airways’ new Boeing 777-300ER aircraft will be featured on twenty-four Dreamliner’s and twelve A380’s.  These designs have proven to be immensely popular with customers.

The British Airlines Dreamliner will have 35 seats for customers in the new 2:3:2 Club World triple configuration; 25 seats in a 2:3:2 World Traveler Plus layout; and an additional 154 seats  in a 3:3:3 formation for those traveling in World Traveler.

The A380 main deck will have 14 seats in First (with extra space for stowing personal items); the Club World cabin will include 44 seats in a 2:4:2 configuration; and in World Traveler there will be 199 seats in a 3:4:3 layout.

Other amenities on both new aircrafts will offer travelers more movie options, TV shows, audio programs and music featured on the airline’s latest Thales inflight entertainment system.  Other benefits include new larger screens in all cabins and an easy-to-use system with shortcut buttons.  You will be able to connect laptops and take advantage of the in-seat power available for the first time in all cabins.

Willie Walsh, chief executive of International Airlines Group (IAG), stated: “We are investing GBP5bn in British Airways’ new and upgraded aircraft, innovative technologies and customer services.  We now have six Boeing 777-300ERs, all fitted with our latest cabins. Our customer feedback and satisfaction scores show the seat and cabin designs have achieved the highest ratings we have ever seen.

By next spring we will have finished installing our new First cabins in the British Airways Dreamliner. The nine new aircraft we take delivery of in 2013 will feature our latest signature designs to ensure the customer experience maintains
the highest standard across our fleet.”

The first Dreamliner will arrive in May 2013 and A380 deliveries will be introduced in July 2013.  British Airways will be the first European airline to operate both new aircraft styles and will announce the routes the new aircraft will operate in Spring 2013.