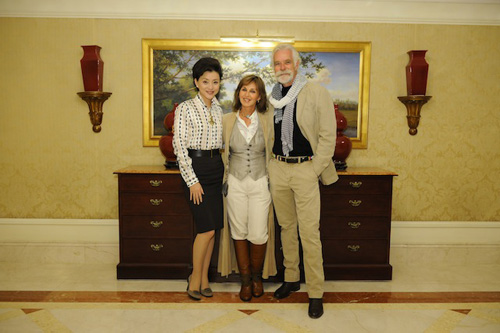 China’s most highly regarded and well known in-depth talk show, Yang Lan One-on-One interviewed Derek and Beverly Joubert, while they were in China. A follow-up from her interview with the Joubert’s on her Village Forum, which was viewed on social media by 195 million people. Recently the Chinese government announced they would start the process of banning all ivory importation.

Derek and Beverly have lived and worked in Botswana, Africa for over 30 years. They are award winning filmmakers and have produced numerous articles for National Geographic Magazine. The Joubert’s have spoken about the rapid rate at which we are losing rhino, elephant, leopard and lion due to a limitless in-demand market in China and South East Asia.

Ivory poaching is a highly prized material in China. It has many usages, one being the material used to make chop-sticks. Amongst the necessities ivory is used for, the Asian hunger for wild animal parts claim to work miracles ranging from increasing virility, to curing cancer.

During the interview with Yang Lan, Dereck Joubert was quoted, “If we can draw on the ancient wisdom of care, compassion, respect, trust and empathy that is so prevalent over 2,000 years of Chinese culture from dynasty to dynasty, we will find a common language. And if China can shutdown the demand, we can handle closing off the supply with anti–poaching and crime fighting.”

The demand has driven ivory poaching and profits from illegal trafficking to record-shattering levels. Africa is losing 5 lions per day, 5 elephants per hour, and a rhino every 7 hours. The decline of these key species could threaten both the environment and the economy of Africa.

Even though this may be an African problem, controlling the demand and trafficking from China and the Far East could shorten poaching along with not ignoring the problem alone. Derek and Beverly have launched a new initiative to help save Africa’s rhinos. A huge part has to be creating awareness. Starting with Africa, and Asia.

If stories like ivory poaching and travel to exotic destinations around the world are appealing to you, be sure to return and read our luxury blog. The Life of Luxury is proud to present the latest news in the luxury industry.