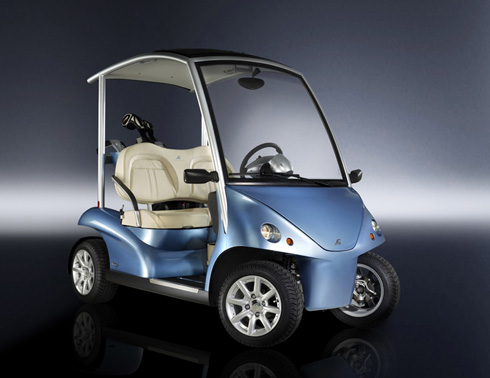 The new Garia LSV Concept Car made its debut at the world-renowned, motor show in Geneva Switzerland a year ago.

The Garia LSV Concept Car was a collaboration between Garia and Valmet Automotive, is a street legal version of The Garia Golf Car.

The Garia LSV is a Low Speed Vehicle that is allowed to travel on U.S. public roads that are currently not accessible to regular golf carts or neighborhood electric vehicles.

“An LSV is ideal for shorter trips and recreational purposes, and with The Garia LSV it is possible to drive directly from your home to, for example, the golf course. This is something many people will appreciate, and it makes The Garia LSV a unique product” says Anders Lynge, Creative Director of Garia A/S and designer of The Garia.

The Garia LSV is fitted with street legal safety equipment such as seatbelts, side mirrors and a license plate.

In the EU, The Garia LSV was introduced as non-street legal.

The Geneva International Motor Show is one of the most attractive motor shows in the world and ranks among the “Top 5 Worldwide” of the most important automobile exhibitions, alongside those in Detroit, Frankfurt, Paris, and Tokyo.

The show is the only one in Europe which takes place every year.

For more information on the LSV and Garia, please visit:
http://garia.dk/garia-lsv/
http://www.garia.com