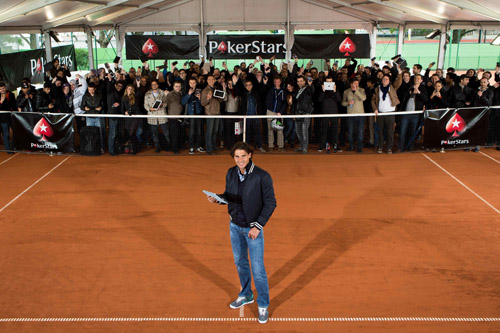 Located just five minutes away from the famous clay courts of the Roland Garros tournament, Rafa Nadal did challenge 100 of his fans to play against him at a Paris tennis club. The twist was it was a game of online poker!

An online poker tournament was held and free to enter. The PokerStars mobile app was played using mobile phones and tablets.

Rafa Nadal discovered that playing online poker allowed him to keep mentally alert and remain in the competitive mind set during his down time between tennis tournaments.

Nadal is the 26-year-old Spanish superstar who is well known globally for fierce competitive spirit on tennis courts all around the world.

Rafa Nadal was quoted, “It’s no secret that I love the competition, and that’s what I like about the game of poker. It’s a game of skill that requires mental strength and the ability to out think your opponents and in that way it is very similar to tennis. As I’m in Paris for the Roland Garros tournament, I wanted to be able to have some fun with my fans, and a poker tournament seemed like a great way to do that.”