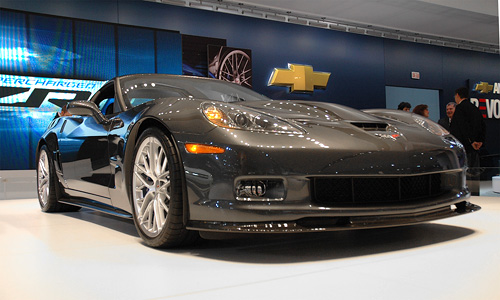 Within the troubled walls of auto giant General Motors, a competition was brewing.

A couple of years ago, Chrysler’s Dodge division announced it’s 2008 V10 Viper would offer 600 horsepower for its base engine. That was a direct jab at Chevy’s Corvette ZO6 and a power struggle ensued in the muscle car arena.

G.M.’s engineers went to work and the result is another classic – the 2009 Chevrolet Corvette ZR1.

The new model surpasses the Dodge Viper by 38 more horsepower with an entry price of $105,000. That price is about $33,000 more expensive than the next-in-line Corvette ZO6 model and $15,000 higher than the Dodge Viper.

The Corvette ZO6 was considered one of the best values in outright car performance, and the ZO6 was the starting point for the new Corvette ZR1.

Besides the many feature upgrades, Chevy says the rise is better than the base Corvette, in additIon to offering better handling capabilities than the ZO6.

If you want one of these babies, you better move fast.  Only 1,800 ZR1’s are planned for the 2009 model year.  Each ZR1 will wear a vehical identification number specifically designed to enhance the car’s status as a future collectible.