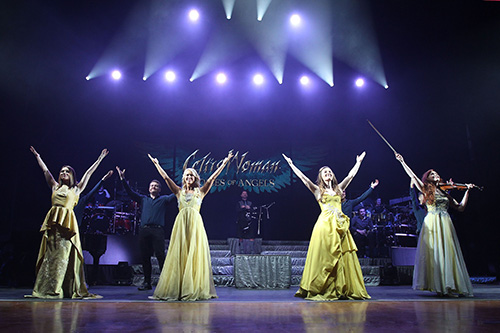 Over the last 12 years, Celtic Woman has been an incredible phenomenon, featuring classic Irish music. Many people first hear about the popular group from their numerous TV specials on PBS. The current Celtic Woman – Voices of Angels tour offers a blend of both modern hit ballads and more traditional Celtic songs.

Performing to sold out shows all around the world, about 4 million people have had the pleasure of seeing Celtic Woman in person. The group has produced 12 albums and sold greater than 10 million records. Released in 2016, their latest album is titled Voices of Angels. It includes 16 songs, such as music hits “My Heart Will Go On” and “Time To Say Goodbye”, along with “Ave Marie”, “Mo Ghile Mear” (My Gallant Star) and “Across The World”. The songs were recorded with the sensational 72-piece Orchestra of Ireland.

The current all-women group is made up of four, extremely talented performers – Susan McFadden, Mairéad Carlin, Éabha McMahon, plus violinist Tara McNeill. Like the show’s title, they truly have “voices of angels.”

In 2012, Susan McFadden became part of Celtic Woman. She has been part of the current group the longest. Susan was born in Dublin and was musically trained at the famous Billie Barry Stage School. She has performed in both television and theater. While living in London, she took part in “Grease” and “Legally Blond.” In Dublin, Susan played the role of “Kathy” in Singin’ in the Rain.

Máiread Carlin joined Celtic Woman in 2013. She was born in the northern Ireland city of Derry. When done with her studies at Trinity College of Music in London, Mairead signed a recording deal with Decca Records. Soon after, she launched her debut solo album, titled “Songbook.” Carlin has toured across both the UK and Ireland with Don McLean. In addition, she sang with the National Symphony Orchestra for RTE TV. As the current members of the Celtic Woman 12-year-legacy, she was asked what do you think makes this incarnation different? She replied, “We all come from such different backgrounds: Eabha comes from a traditional Irish way of singing called Sean Nós. Susan trained in musical theater, Tara is a classically trained violinist and I come from a classical/folk background. It’s not often that fusion works but for some reason it just does with us. It’s amazing.”

Eabha McMahon made her debut with Celtic Woman debut in late 2015. She also took part in the Celtic Woman Public Television special, DVD and album, titled “Destiny.” At the young age of 15, Éabha became the youngest member to join Anúna. They were the original Riverdance choir. Eabha finished her first solo album last year. She is a fluent Irish speaker and was brought up both singing and speaking Irish at her Dublin home. To be part of Celtic Woman is a wonderful experience and she’s proud to be representing her Irish roots. When asked if the group has any rituals before hitting the stage? “Yes. We have a group ritual whereby we all stand side stage and link our baby fingers together while standing in a circle. It symbolizes unity and sisterhood. No matter what happens on that stage we have each other covered. Nobody stands alone on that stage. It’s a symbol of support and empowerment. It really sets us up for the show.”

The newest member of Celtic Woman is Tara McNeill, who replaced former violinist Máiréad Nesbitt. This talented violinist joined in August of 2016. She becomes the first multi-instrumentalist. She also plays the harp and sings with the group. Tara also graduated with honors from the Royal Irish Academy of Music. Tara has toured around the world, both as a singer and violinist. You may remember her from the 2015 Public Television special, “Destiny.” Tara accompanied the singers by playing the harp. When asked about the special chemistry of the group and exactly why it works, she answers, “I think the four of us are very keen to make Celtic Woman the best that it can possibly be. Because we each have our own strengths, there are endless possibilities as to what this group can achieve. We are also very lucky to have a special bond that means we are there for each other, always supporting and encouraging each other to be the best that we can be!”

The actual show was visually stunning. A large background screen displayed scenic pictures and clips of Ireland, showcasing its natural beauty. Anybody who has traveled to Ireland will definitely recognize many of the locations. From the ragged coastline to rolling countryside, Ireland is a land of enchantment.

Below is the setlist of songs performed at their show:
MO GHILE MEAR
MY HEART WILL GO ON
DÚLAMAN (Mairead)
ISLE OF HOPE (Eabha)
AMAZING GRACE
ACROSS THE WORLD
AS SHE MOVED THROUGH THE FAIR
THE KESH INN
DANNY BOY
NIL SÉN’ LA

The four women looked simply radiant. Their gorgeous gowns are each created by Synan O’Mahony, who is a well known Irish designer. Whether singing solo or as a group, each song is a captivating experience for the audience. The women’s voices are individually incredible. When singing together, it’s pure magic. The way they harmonize and take turns singing the main chorus is exceptional. The entire audience experience from the music and choreography to the lighting and visuals is outstanding.

The music wouldn’t be complete without an accompaniment of musical instruments. The band is top notch. With two percussionists, keyboard, harp, acoustic guitar, fiddle and even a bagpipe, the authentic Irish music comes alive. The show lasted over two hours and includes a 20 minute intermission. The show’s tempo flowed effortlessly from classic ballads to Irish dance.

Hearing the rich sounds of the iconic song “Danny Boy” was truly memorable. The beautiful hymn “Amazing Grace” was the night’s most emotional song, for sure. The group of male dancers were excellent as well. In addition, their Irish dance moves were always in sync with the music and drew numerous rounds of applause. As the women sang the final song, the crowd rose in unison for a rousing standing ovation to end a unforgettable evening of fine music and dancing.

This all-female Irish musical ensemble is incredibly talented and delivers a blockbuster show. Everyone should attend a Celtic Woman performance at least once. For many, especially with Irish heritage, it’s a “Bucket List” item. In addition to standard tickets to the show, there are VIP packages available with “meet and greet” opportunities with the Celtic Woman performers.

Contact The Life of Luxury for VIP access to the world’s top award shows and private events. We can also arrange a “meet and greet” with your favorite celebrity or at a concert or stage show like Celtic Woman. Be sure to follow this popular luxury blog for more stories!