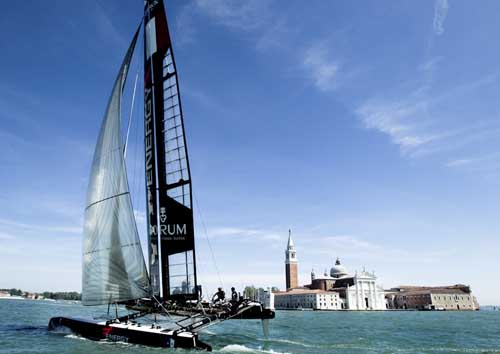 Between May 15th and 20th, the next stage of the America’s Cup World Series is taking place in romantic Venice, Italy in front of the magnificent St. Mark’s Square.

Luxury watchmaker Corum is a sponsor of the Energy Team. For this segment of America’s Cup World Series there will be a change as  Loïck Peyron replaces Yann Guichard and takes the helm of the French one-design boat – Energy Team AC45.

Corum brand joined France’s “AC45 Energy Team” to be its Official Timekeeper. The sponsorship by Corum reinforces the fine watchmaker’s full support of the Peyron brothers’ drive to win the next America’s Cup.

During a recent interview, Loïck Peyron was asked if there have been some changes to the programme in particular with the match race event.
He replied, “Yes, the rules have changed and that’s a good thing. In Naples for example, it was all very sudden with elimination after just one duel. That gave rise to some strange results, with Spithill finishing seventh, for example. In Venice, from the quarter finals, it will be the best of three or in other words two wins if you prefer. To sum up, we shall be sailing much more. Another change is that the fleet race on Super Sunday now has a weighting of three instead of five. That means that the other races during the week will count more. This need for consistency is something that suits us.”

Peyron answered the question, what are the characteristics of the sailing area in Venice?
“In Venice, anything can happen. I know a little about the waters here having raced aboard Oman Sail in an Extreme 40 event and because it was here that the Round Europe races started, when I raced on Fuji. These waters are extremely tricky, as there are so many different parameters and local effects. You really have to grab every opportunity. During the first two days, we’ll be racing outside off the Lido, but for the final three days and Sunday’s big race, we shall be inside just off St. Mark’s Square. This is going to be truly magnificent, even if we know that the race area is going to be complicated to deal with, as it is not very big at all. On an Extreme 40, the race area was already quite small, so on an AC45… But I enjoy this sort of challenge and in this legendary setting, it’s going to be a marvelous experience. Usually, the winds are quite light there and we may well have to fit the wing extensions.” 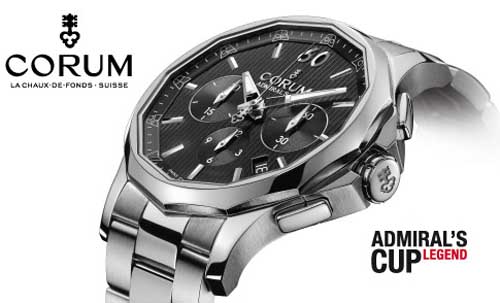 The Admiral’s Cup 42 Chronograph watch by Corum reflects a number of the signature codes of the original Admiral’s Cup, united in an harmonious blend of sportiness and elegance.