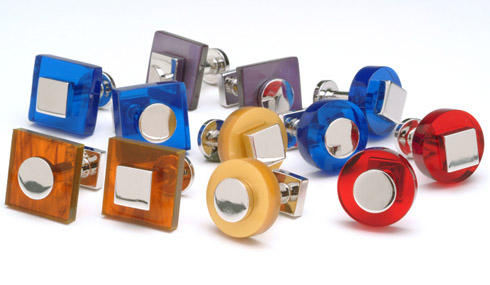 Completely hand-crafted, each pair of Baade II double-faced cufflinks is considered a collectible – and wearable – work of art by connoisseurs and cognoscentis, alike.

Luxe fashion designer and noted style scribe, Alan Flusser, satirically mocks, “Single-sided cufflinks with a decorative panel on just one side suggests the wearer could only afford the decorative design, gold or gemstone on the outside.”

Despite remaining Europe’s dominant cuff link design since the early-1700s and their continued embrace by the world’s best dressed fashionistas, double-sided cufflinks have virtually vanished in America.

Thank American’s ignorance of fashion protocol and custom, along with the far cheaper cost and added convenience of single-sided cufflinks, for the American demise of double-sided cufflinks.

Two double-sided linked cufflinks “The most prized examples of cufflink art have always relied on all four sides to convey their craftsmanship and lineage,” tells renowned style scribe and fashion designer, Alan Flusser, in his top selling primer, Dressing the Man, adding that: “To fully exploit the cufflink’s decorative potential, each side should bear a design and connect with a chain or link.”

Since its 1988 founding, hand-enameled cloisonne and champleve designs have remained the company’s flagship design signature.

Today, Baade II’s wide ranging array of over 500 differing, limited edition designs – all meticulously handcrafted in America and now including precious and semi-precious stones as well as novelty styles – are retailed by over 300 of America’s premier specialty retailers, from Barney’s New York and Mitchells of Westport to Beverly Hills’ iconic menswear retailer, Carroll & Company.