The US Grant Hotel in San Diego Turns 100 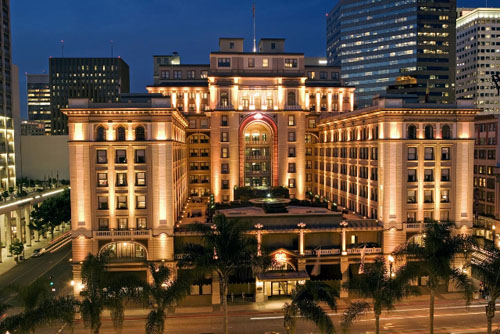 The iconic US Grant, a Luxury Collection Hotel, is preparing to celebrate an exciting milestone – its official 100th anniversary occurs on October 15th, 2010.

Since the opening in 1910 of this luxury hotel, The US Grant has truly become a symbol of pride in San Diego with the city’s vibrant downtown scene developing around it over the last 100 years.

The US Grant features 270 luxurious rooms that include 47 elegant suites and remains known as “The Crown Jewel of Downtown San Diego.”

The US Grant Hotel is the city’s only Exxon-Mobil Four Star Hotel, in addition to crowned winner of HotelWorld’s “Best Luxury Guestroom Design Award” for 2008, and also named one of The Robb Report’s “Top 100 Hotels in The World.”

Over the years, The US Grant Hotel has played host to many celebrities and dignitaries, including 14 U.S. Presidents from Woodrow Wilson to John F. Kennedy to George H.W. Bush.

The luxury hotel’s guest have all been impressed by its incredible grandeur and unparalleled hospitality.

The luxury hotel was named for President Ulysses S. Grant, and was opened by his son, Ulysses S. Grant, Jr. who came to San Diego in 1893 seeking a better climate for his ill wife and looking to build a grand hotel.

In 1905, the first bricks for The US Grant Hotel were laid and then five years later in October 1910, the hotel opened with 437 elegant rooms.

In 2006, the hotel underwent a $56 million renovation that included historic restoration, new furniture, as well as a variety of new commissioned art that gave this historic gem a modern look while preserving its rich history.

For fine dining, the hotel’s Grant Grill has been the home of the ultimate “power lunch” since 1951 and proudly serves market-fresh regional California Cuisine in an Art Deco-inspired setting.

In the Summer of 2009, Grant Grill received a lounge renovation that now features Mooi crystal chandeliers and metal bar tables that were fabricated locally. This new decor has given the room a polished and luxurious look with a touch of sparkle.

To share in this milestone achievement celebration with its guests, the US Grant is offering the following special anniversary packages now through the end of the year:

100th Anniversary Offer
Create your story at THE US GRANT with our exclusive 100th Anniversary offer. Elevate your experience from $249 per night and enjoy:
• Exclusive upgrade to a suite
• Breakfast for two each morning
• Valid through December 31, 2010
Reservations can be made online or by phone at 1-866-716-8136. Please use promo code GAN.

There will also be a cocktail reception open to the public on Saturday, October 16, 2010 to celebrate the US Grant’s 100th anniversary with a series of events and additional
promotions designed to capture the history of the hotel and evoke the memories that the hotel inspires in each of its guests.

For additional in information, please call (619) 232-3121, or visit the US Grant online at: www.luxurycollection.com/usgrant