The History of the Super Bowl – Pigskin Party Mania 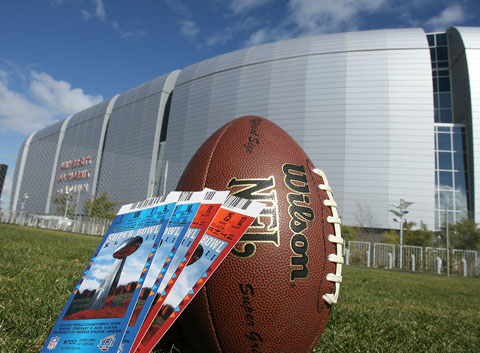 The Super Bowl is the ultimate sports event. A single game that solves the question – who is the best football team?

The Super Bowl game is basically the Academy Awards of American Football. The two best teams in the world play each other for the chance to reign as world champions.

The prize is not just money the players and coaching staff receive, but the coveted Super Bowl ring, a place in NFL history and bragging rights.

From the moment September starts, football fans all hope, pray, root, rub the head of their lucky doll, paint their faces, and wear team jerseys to support their favorite team.

Die hard football fans throw extravagant tailgate parties that can start as early as 8am, as soon as the stadium parking lot opens. They toss footballs, barbecue all types of food, listen to loud music, watch football highlights on portable TVs and chant for the coming victory of their home team.

Now imagine all of this magnified by about 200 times. That is the biggest game there is …. the Super Bowl. But when did it all begin?

Although it may seem as if the Super Bowl has existed forever, actually the first Super Bowl took place quite recently. Super Bowl 1 made its first appearance only 40+ years back, on January 15, 1967.

The Green Bay Packers opened the Super Bowl series by defeating the AFL champion Chiefs. The Packers collected $15,000 per man and the Chiefs $7,500-the largest single-game shares in the history of team sports at that time.

Although the news press and football fans had already begun using the shorter term for the championship, it was only in 1969 that the original name ‘AFL-NFL World Championship Game’ was officially replaced by ‘Super Bowl’.

Possibly the biggest upset in the history of Super Bowl was created in the third game. That game was won by the New York Jets led by Joe Namath, when they defeated the Baltimore Colts in a huge football shocker.

In Super Bowl 4, the Minnesota Vikings were defeated by the Kansas City Chiefs of the AFL. That game was the final championship game before the two leagues merged together.

In 1970, the two leagues merged, with the Super Bowl becoming the championship game of the NFL. The name ‘Super Bowl’ itself can be traced back to Lamar Hunt who suggested it because of the super ball toy his daughter had and on the basis of the fact that a variety of bowl-shaped stadiums were the venues where college football games were played.

Ever since, the champions of the NFC and the AFC have been playing the Super Bowl. The team that wins gets Vince Lombardi trophy, which has been named after the Green Bay Packers’ coach.

The location where the Super Bowl will be played is decided by the NFL about three to five years in advance, on the basis of various cities competing with each other to host the event.

Usually, the southern cities of the US are given preference or those cities that have domed stadiums. More than half of Super Bowl games have been played in Los Angeles, Miami, and New Orleans.

The three major television networks of the US broadcast the Super Bowl game every year, keeping millions of viewers glued to their TV sets, plus of course the thousands in the stands. Almost as big as the football game itself, are the memorable Super Bowl commercials. Corporations shell out enormous amounts of money to get their 30 seconds in the spotlight, in front of millions of worldwide viewers. For a look at 25 of the most popular Super Bowl commercials – Click Here.

Just as quickly as this year’s game ends, football fans everywhere await with bated breath for Super Bowl history to be made again next time.