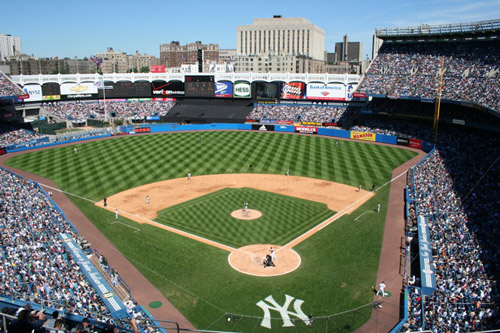 It is the quintessential baseball stadium. It is “The House that Ruth Built,” and “The Home of Champions.” It is none other than Yankee Stadium. Yankee Stadium is a cultural landmark with a history like no other ballpark.

But this year will be the last one for Yankee Stadium. The stadium will be replaced by a modern, more fan-friendly facility across the street – one that will feature a martini bar.

Yankee Stadium has come to represent an oasis in the midst of one of the worst sections of New York City, the Bronx. Her majestic facade beckons you to enter. Looking out upon the field one can view the clean dirt, impeccably lined along the baselines. The perfectly cut green grass appears to never end, fading out of sight into the vast, cavernous outfield.

The smell of the hot dogs and peanuts, the sound of the bat cracking, the feel of a crisp autumn day brings one’s senses alive. Today, Yankee Stadium draws fans from all over the world to experience the game of baseball. But, back when the stadium was built, the sport was being resurrected by the likes of one man, Babe Ruth.

Only one year after the Yankees purchased Babe Ruth from the Boston Red Sox,  the Yankees made one more buy that would forever change the way the game was watched.

In 1921, the management team of the New York Yankees announced that it had purchased a 10-acre lot in the west Bronx. The land was purchased for $675,000 from the estate of William Waldorf Astor. The land was positioned across the Harlem River, where the former of the Yankees, the Polo Grounds, sat.

Up until the new stadium was built, the Yankees shared the Polo Grounds with the National League Team the Giants. However, because of the Babe Ruth acquisition, the Yankees were clobbering attendance records, shattering the draw of the Giants, and other major league teams, for that matter. 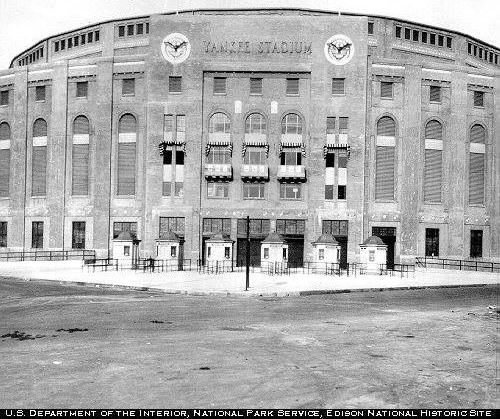 The fans came to see Babe. He was the drawing power that helped to save baseball and generate ongoing interest in the national past-time. In just one year after acquiring the Babe, the Yankees’ attendance had doubled. The Yankees attendance put the Giants to shame, which prompted the owner of the Giants to promptly evict the popular team from the Polo Grounds. The year was 1921.

Later that year, the Yankees’ owners resolved to build a spectacular stadium of their own. The goal was to create baseball’s first three-tiered structure, with a capacity of 70,000. It would be baseball’s first official stadium.

Originally, the plan was for a triple-decked stadium, with a roof all the way around. Because the stadium seemed too much like a tower and too foreboding, the original plans were scaled back. The triple deck would no longer go all around the stadium, but would end at the foul poles. A 15-foot copper facade was also erected to adorn the stadium’s third deck, which became one of the stadium’s most recognized and grandest feature.

The original Yankee stadium, like today’s, favored left-hand hitters. The original dimensions of the stadium were 295 to dead right, 395 to dead left, and up to 429 feet to center.

Amazingly enough, Yankee Stadium was constructed in only 284 days, and it was ready for its inaugural game against the Red Sox on April 18, 1923. During that game, Babe Ruth officially christened the stadium with a three-run homer. It was easy to see why Yankee Stadium was commonly referred to as “The House that Ruth Built.”

The first game in the stadium yielded a crowd of 74,200, topping what had originally been expected. The stadium also pleased its fans with an unheard of eight bathrooms for men and women.

Many facelifts and modernizations later, Yankee Stadium has withstood the test of time, and is still held by many, as the greatest venue in all of baseball.

Even though the new stadium will welcome the Yankees next season, none of us will ever forget the original – Yankee Stadium.