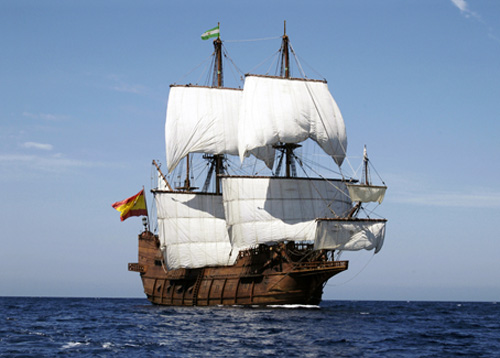 If you are in New York City the week of July 4, then be sure to check out the “The Festival of Tall Ships.” Get the opportunity to step onboard El Galeón, which is a replica of 16th century ship that was part of Spain’s West Indies fleet.

It’s a great way to see an authentic wooden replica up close and personal. The impressive El Galeón ship will sail into New York Harbor and the South Street Seaport and can be seen between July 4 – 12, 2015.

Sponsored by Hornblower Cruises & Events, Cameron Clark, who’s the Vice President and General Manager of Hornblower New York was quoted, “For one week only, El Galeón is commandeering South Street Seaport which will be a boom to the lower Manhattan community during the busy July 4th period. We are also donating a portion of ticket sales from El Galeón to the South Street Seaport Museum and the New York Harbor School, both staple institutions that represent the best of the maritime industry and its links to New York Harbor and also provide an important piece of history for visitors and its neighbors, including the Museum’s sail training and sea education programs on the Lettie G. Howard.”

El Galeón will be docked at Pier 15 at the South Street Seaport’s Waterfront Esplanade. Visitors can relive the route of famous explorer Ponce de Leon aboard the amazing, 170-foot wooden ship. Juan Ponce de León was a Spanish explorer lived between 1460 and 1521. He explored a nearby, San Juan Bautista island, which later was named Puerto Rico. He actually as the island’s governor.

There will an available exhibition tilted, “San Pelayo” where you can learn about 16th century European sailing techniques and navigational technology during that era.

El Galeón is an impressive Spanish ship. It features three large masts, seven sails, six decks and even crew quarters. As you step onboard and tour the ship, explore the expansive main and upper decks, plus the quarter and gun decks and Admiral’s room.

El Galeón tours are available 9am – 5pm each day. If you would like to host a special event one evening, the ship can hold up to 225 people – making it ideal for business conferences, VIP events and other special occasions.

Has visiting New York City always been a dream of yours? Contact The Life of Luxury and have us plan and book your luxury travel itinerary. Come back to read other stories like the El Galeón Spanish ship and follow this luxury blog.