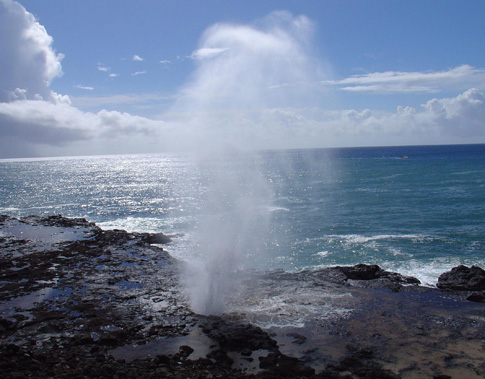 While on the island of Kauai, be sure to take the time to see the famous Spouting Horn in Poipu. Many Hawaiian legends surround this coastal phenomenon.

The Legend of the Spouting Horn is about a lizard family, consisting of a brother and two sisters. When the mo’o (lizard) learned that his sister had died, he was blinded with tears and accidentally swam into the hole and was trapped forever. The geyser sound is supposed to the crying of this giant sea lizard.

The Spouting Horn is a lava tube, which forces salty surf water through an old volcanic lava tube and up to 50 feet in the air. The result is a majestic geyser like spray, causing strange groaning sounds.

Every wave produces another spray. This amazing phenomena is particularly wonderful at sunset when the spray becomes incandescent with the colors of the rainbow.

Back in the 1920′s, there used to be a much bigger blowhole called Kukuiula Seaplume which was near the Spouting Horn. It shot water as high as 200-feet in the air. Because the salt spray was damaging a nearby sugar cane field, the hole was blasted away.

To get to the Spouting Horn Blowhole, get off Lawai Road, which runs west from the south end of Poipu Road (part of Route 520).