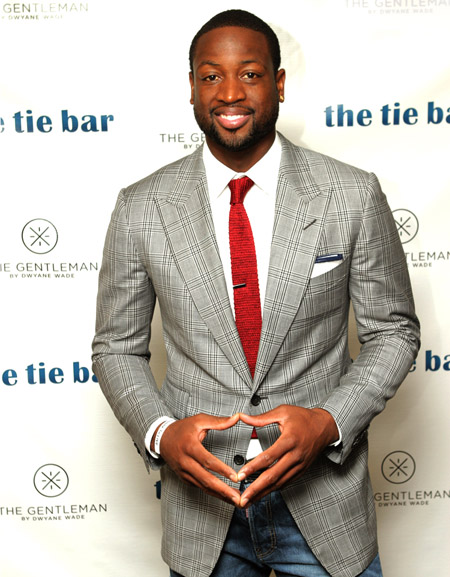 The Tie Bar has become the go-to destination for stylish men’s furnishings Since its launch in 2004. This popular online neckwear company primarily offers neckties, tie bars and pocket accessories.

Wade a style icon in his own right will design and provide creative inspiration for the limited edition tie collection that will launch in November 2013.

Dwyane Wade is the ideal choice as he’s been named among the best-dressed celebrities by various media outlets including GQ, Esquire, Vogue and The New York Times.

The new tie collection will feature approximately 30 bow ties, 15 neckties, 15 pocket squares and a limited assortment of tie bars and cufflinks. The goal of the new Tie Bar collection is to take a modern approach, in addition to paying homage to traditional menswear.

All neckwear products designed by Wade will have the label “Dwyane Wade for The Tie Bar” and also be part of “The Gentleman by Dwyane Wade.”

Anand Shah who is The Tie Bar CEO was quoted, “Partnering with Dwyane was a no-brainer for us. He is a trailblazer on and off the court; particularly in the
way he expresses style. We are excited to work with him and look forward to bringing his vision and creativity to our customers.”

Based in chicago, The Tie Bar has not only shifted the way men purchase their neckwear products by offering premium ties for $15, but has also cemented the benchmark for both style and design.

Dwyane Wade is not only a three-time champion and nine-time All-Star selection with the Miami HEAT, but a highly respected athlete known around the world.

The new Dwayne Wade and The Tie Bar collection will be available exclusively at The Tie Bar – http://www.thethebar.com/

If you are looking for that perfect gift, please contact one of our shopping concierge members at The Life of Luxury.