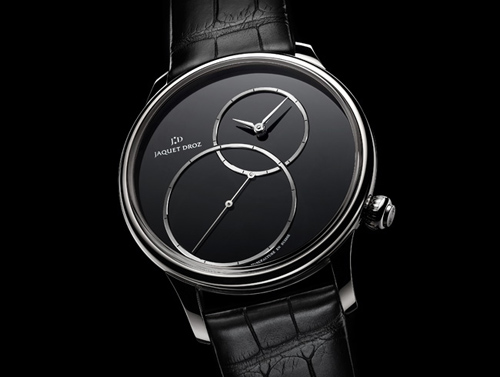 With the Baselworld 2016 show only a month away, Jaquet-Droz just announced the introduction of their new Grande Seconde Off-Centered Onyx luxury watch.

This watch has a bold, sleek look. We love the intense, black watch dial. Its simplicity draws your eyes in to also admire its sophistication and modern elegance.

You would have to go back more than a hundred years to discover the initial, creative concept. It started back in the 18th century during the peak of the Enlightenment period. Pierre Jaquet-Droz was the founder luxury watch brand Jaquet-Droz. He developed the Grande Seconde watch and it definitely revolutionized thew world of watchmaking.

His unique design superimposed two dials. The first was off-centered at the 6 o’clock position. Marking the seconds was an extra-fine hand. When the two watch dials were combined, it formed the iconic figure 8 symbol. This symbol became the lucky number for Jaquet-Droz.

The new Grande Seconde Off-Centered Onyx watch now features the second watch dial at the 7 o’clock position. The shift is subtle but creates a stunning, visual appearance.
This new watch also has a first for the company. Jaquet-Droz is introducing a 43-mm stainless steel case for the very first time.

The onyx disc of the Grande Seconde Off-Centered Onyx has been carefully cut and polished to create the gorgeous watch dial. The craftsmen Jaquet Droz have meticulously cut the indexes right into the 18-carat white gold circles that make up the large hours and minutes dial, as well as the smaller seconds dial. The end result is the stylish figure 8.

You will notice the winding stem is at the 4 o’clock position. Being offset creates an appealing and dynamic look to this luxurious watch. It helps to exude VIP style and a look of class. For those who desire a luxury lifestyle, this fine watch would make the perfect addition to your collection.

What we really like is the way the light reflects off the mirror like, onyx watch face. So depending on the time of day, the watch takes on a different look that is impressive each time.

Jaquet-Droz also offers a silvered opaline dial along with an alligator leather strap in black.

The Life of Luxury has many luxury industry contacts and can help you buy that perfect watch, including the new Grande Seconde Off-Centered Onyx by Jaquet-Droz. If you like reding out new luxury watch relseases and industry news, then come back again to follow our luxury blog.