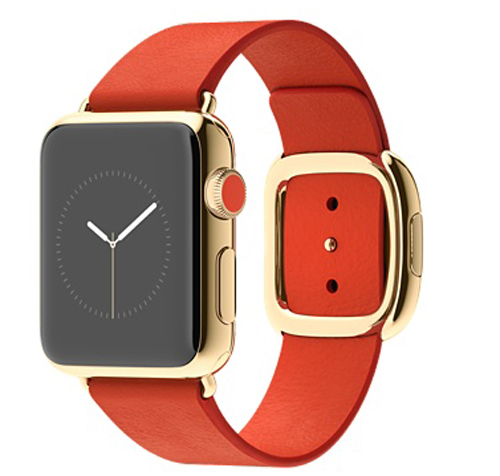 Although we’re still over a week away from the new Apple Watch officially becoming available for shipment, pre-sales activity has been incredible. Looking at the Apple website, current watch models show four and eight week long wait windows.

The new Apple Watch line is a new push for the hi-tech giant, makers of the wildly popular iPhone and iPad products. The Apple Watch came close to selling out after about 30 minutes when when first going on sale. Consumers who did but must now wait until May or June to received their order.

For those with expensive tastes, the new watch from Apple even comes in a luxury version. The Apple Watch Edition has a lofty price of $10,000. If you want more bling for your buck, consider the the 18-karat gold Edition version (photo above), which is the most expensive offering. Price tag is a whopping $17,000. The Apple Watch Edition 38mm comes in a gorgeous 18-karat yellow gold case and features a sleek, bright red buckle. According to a recent Washington Post article, this 18-karat gold Edition watch actually sold out in China.

The news is quite impressive and a relief for Apple and its investors. Some felt making a move into the watch market was a big risk, especially moving into the luxury segment and going up against the dominant Swiss watch brand. It looks like Apple has another hit and many will say, they never had any doubts.

In a client note, Gene Munster who is a Piper Jaffray analyst reported, “Based on our observations and media reports, launch day supply was largely sold out within the first 10 to 30 minutes, depending on model.” Munster expects that Apple to sell around 2.3 million watches in the April-June quarter and the tech giant to ramp production between mid-May and June.

Initially feedback that space gray aluminum Apple Watch Sport model had the most interest amongst buyers.

If you are an avid watch collector and would like to own the new Apple Watch, contact us for more information about availability. Come back often to read this luxury blog and hear about the latest hi-tech products and luxury watch industry news.