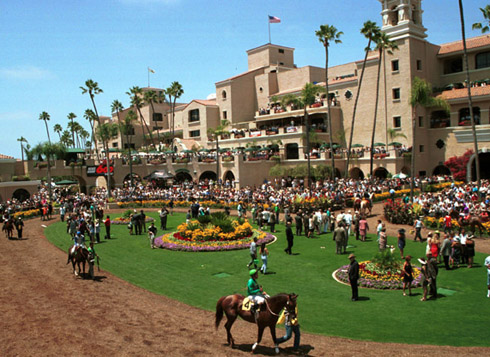 In 1937, a well known singer named Bing Crosby talked to some of his Hollywood friends about a dream he had to build a horse racing track in the quiet resort community of Del Mar California, just north of San Diego.

His friends Jimmy Durante and Pat O’Brien shared Bing’s dream and set out to help him build a great race track and where they could play the horses all day and the girls all night in the pleasant climate and cooling Pacific coast breezes of Del Mar.

When the Del Mar Thoroughbred Club and race track opened, Bing himself took tickets at the gate and welcomed race fans to what was to become one of the most famous race tracks in the United States, visited by race fans, horse owners and sports enthusiasts from all over the world.

A milestone in the track’s history came during the summer of 1938 when the Del Mar Thoroughbred Club hosted a $25,000 match-up between Charles Howard’s Seabiscuit and the Binglin Stable’s Ligaroti. Only Major League Baseball superseded horse racing in American sports during this era.

The upcoming match was the talk of the country. The race was the first time a thoroughbred horse race was ever broadcast nationally by NBC radio. The rest is history: Seabiscuit won and the Del Mar Race Track was famous – once and for all joining other storied race tracks in the annals of sports history as one of the most famous race tracks in the country.

In the years between 1938 and 1941, Del Mar entertained recording stars and Hollywood luminaries the likes of Douglas Fairbanks, Lucille Ball, Desi Arnaz, Dorothy Lamour, Ava Gardner and Don Ameche. Joe Frisco, a comedian of the day would crack his Del Mar racetrack one-liners, most of which played on his reputation as an inveterate loser: “I went to the racetrack today but it was closed, so I just shoved the money under the door.”

From 1942 to 1944, Del Mar was shut down when the U.S. plunged into World War II. In the early war years it was a training base for the U.S. Marine Corps, then used as a manufacturing site for B-17 bombers. After the surrender of Japan in 1945, President Truman declared August 15 a national holiday and 20,324 patrons attended Del Mar to bet whopping $958,476, a Del Mar record.

Shortly thereafter the railroad started a special promotion. The “railroad/racetrack special” brought race patrons from Los Angeles to Del Mar. Meeting the train and “star watching” became popular sport for track patrons and locals. Today, more than 70 years (and nearly $60,000,000 in improvements) later, the racing season will once again begin on July 22, 2009 through September 9.