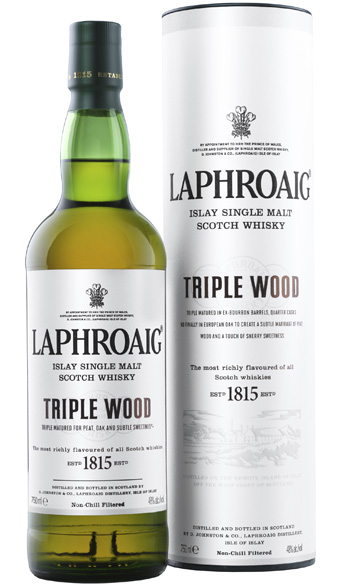 Laphroaig® is proud to be the world’s #1 Islay Single Malt Scotch Whisky. As fall has arrived and the winter holidays will be upon us all soon enough, Laphroaig introduced its latest seasonal expression – Laphroaig Triple Wood.

Laphroaig Triple Wood is 96 proof and best enjoyed neat. This allows the powerful, yet slightly creamy consistency of the whisky to speak for itself.

The result of this process is a great tasting whisky, boasting a rich blend of creamy vanilla and hints of sweet fruit. Plus the whisky retains the distinctive smoky peat flavor that Laphroaig is well known for.

John Campbell is the Master Distiller at Laphroaig and was quoted, “We are thrilled that our Friends of Laphroaig® members are just as passionate about their Scotch as we are. Triple Wood is the perfect seasonal expression for fall. Its bright gold color and bursts of peat, vanilla and fruit flavors embody the fall season and bring you back to Islay, the land that gives Laphroaig® its unique peaty notes.”

The Friends of Laphroaig is the distinguished Laphroaig loyalty group that provides a lifetime lease on a numbered, one square foot plot of land in Islay. The land is located along the the Killbride stream, which is the critical Laphroaig water source for various whisky’s.

Friends of Laphroaig currently includes over 500,000 members from greater than 150 countries all around the world.

A recipient of numerous awards, Laphroaig is also the only Single Malt Scotch Whisky to bear a Royal Warrant bestowed by HRH Prince Charles.

Laphroaig Triple Wood has a suggested retail price of $59.99 per 750ml bottle.