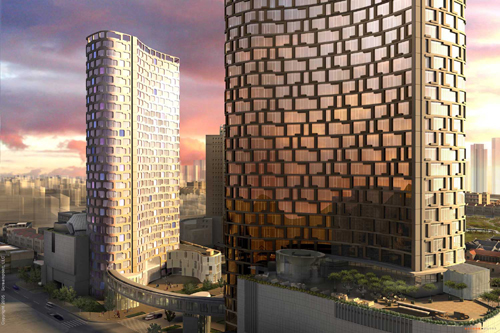 An elite panel of professional media specialists, exclusive members of the industry and World Traveller Magazine readers named Shanghai China’s new Jumeirah Han Tang Xintiandias the ’Most Expected Hotel’.  The Jumeirah hotel was selected for the award due to the group’s innovative plans for the property including; investment in groundbreaking architecture, unique and innovative attractions and incorporation of historical elements from both the Han and Tang dynasties.

On December 27, 2007, Doris Greif, the hotels General Manager, attended the ceremony and received the award on behalf of the hotel. She said: “Jumeirah Han Tang Xintiandi will redefine luxury hotel standards in China and will be the most prominent and prestigious new hotel development in the downtown Luwan district of Shanghai.  This award highlights our continued commitment to our ‘Stay Different’ philosophy and we would like to take this opportunity to thank both the panel and the readers of World Traveller magazine for their votes.”

Recently, the Jumeirah Han Tang Xintiandi had a roof topping ceremony and made an announcement that it completed the construction phase of its first hotel in Asia. This was a significant milestone and hotel is on schedule to open in August 2008.

The Jumeirah Han Tang Xintiandi, will boast several unique attractions once completed – including a purpose-built wedding pavilion and signature Chinese restaurant – to complement the super-luxury guest rooms and service for which Jumeirah Hotels and Resorts have become renowned the world over.

The Jumeirah Han Tang Xintiandiis located in the heart of Xintiandi, an exciting restaurant and bar, retail and entertainment component of a master-planned development in the heart of downtown Puxi, Shanghai. The award-winning development will also encompass prestigious office space, high-end residential complexes and quality retail facilities.