Cutting It Close With the Hommage Damascene Razor 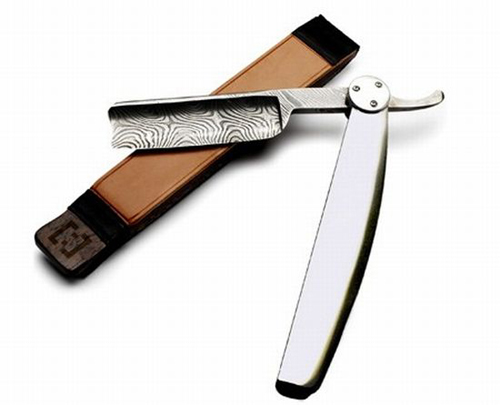 Ah, leave it to the French. Hommage, the Parisian supplier of luxury grooming equipment, skincare and spa services for men, has developed a limited edition, platinum-sheathed straight razor using the same ancient layering techniques as the Crusaders’ swords. The price is an eye popping $30,000!

Called the Damascene Razor, this shaving blade is hand-forged in Germany with 128 layers of legendary Damascene steel, with a rose and torsion pattern. This process in the same arcane fashion used to forge Escalibur, as described by Sir Thomas Mallory in La Morte D’Arthur. The sheath is then plated in pure platinum, and treated to resist tarnishing.

The pricey razor comes in a lacquered gift box of Tanzanian anigré wood. The name Damascene is often attributed to the steel swords made in the vicinity of Damascus, Syria and first gained its mythical reputation during the medieval Crusades.

According to the company – Hommage, “the blade of a Damascus steel sword was said to be able to cut a piece of silk in half as it fell to the ground and was strong enough to cut through a rock without losing its sharpness.”

So gents, be careful and make sure you don’t cut off more than you want. But if used cautiouslt, now you can use it to get the world’s most expensive shave.