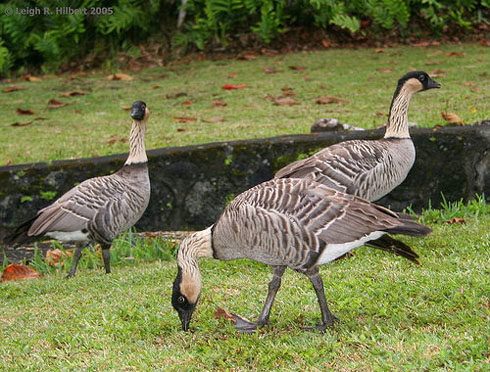 The Nene or Hawaiian Goose, is a medium sized goose. The Nene has a black face and crown with cream-colored cheeks.

The neck is buff colored with black streaks and a dark, narrow ring at the base. The upper portion of the bird’s body is a gray-brown along with lighter coloring on the edges of the feathers. The Nene’s bill, legs, and feet are black and the eyes are dark brown.

The Nene became Hawaii’s state bird in 1957. By that time, the Nene were already bred in captivity as conservationists fought to keep the bird from going into extinction. Their goal was to one day, free the Nene back into the wild, and save the bird species.

The Nene is the sixth most endangered waterfowl species worldwide. The Nene used to live across all of the main Hawaiian islands and their population was estimated as big 25,000 birds.

Sadly by 1952, their numbers diminished to only 30 birds due to hunting and the introduction of predators such as mongooses, pigs, and cats.  The Nenet was listed as an endangered species in 1967.

Due to new laws and a massive Island effort, this special bird now flourishes. They roam freely around the Hawaii Volcanoes National Park on the Big Island of Hawaii where laws still protect them.

The resemblance of the Nene to the Canadian Goose is uncanny. But there is a valid reason for this. Surprisingly, the Nene actually is the Canada goose!

The Nene were not brought to Hawaii, but somehow they managed to make their way all the way to Hawaii. Over several centuries, the Nene have learned to adapt to the much warmer climate.