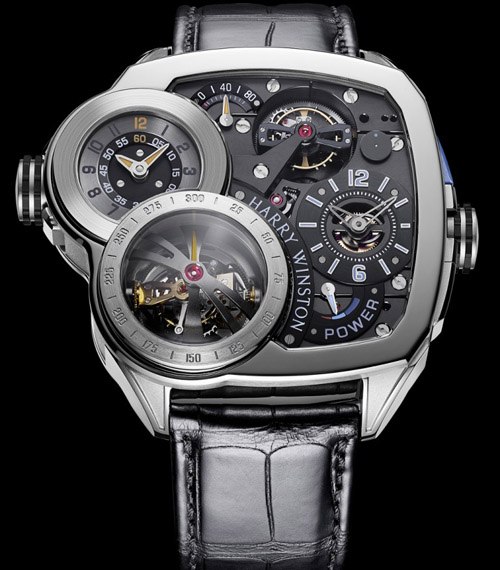 Harry Winston has introduced first in horology history, by combining two independent hour indications. The first is regulated by a tri-axial tourbillon and the second is by a karussel.

The watch’s 18k white gold case is quite large, measuring 55 mm by 49 mm. The case is back is sapphire and water resistant down to 30 meters. The HW4701 caliber is the most complex in the entire Histoire de Tourbillon watch series.

Histoire de Tourbillon 6 follows the tradition of its series predecessors with the similar, highly recognizable design. This luxury timepiece was unveiled at BaselWorld 2015 show earlier this year in Switzerland. Along with its construction and complexity, the watch’s unique design is like no other and has become a true trademark of Harry Winston.

The watch movement of the Histoire de Tourbillon 6 is made of two independent parts. It’s been compared to having 2 separate heads a 1 body. On one side, you’ll notice the hours and minutes. They are regulated by the tri-axial tourbillon. Easily identified because of the unique color coding – orange against the watch’s gray background. It’s also housed inside a rounded extension of the luxury watch case. The watch also features a carousel that will rotate at 30 seconds.

The tri-axial tourbillon is an incredible sight to behold and an extremely complex device. The first cage includes the balance wheel and operates one turn every 45 seconds. Rotating within the second cage, it spins around every 75 seconds along its vertical axis. Next, the device moves within a third, spherical cage. The rotation here is done once in 300 seconds.

When actually started, the karussel functions as the regulator for the independent part of the watch’s interior HW4701 movement. It’s positioned on the right side of Histoire de Tourbillon 6. By default it will stop, but will commence running again when the pusher is pressed. That pusher can be found on the caseband. The specific construction of the karussel means that its balance wheel and its cage are simultaneously linked to the movement’s energy source.

As mentioned earlier, the Histoire de Tourbillon 6 watch from HArry Winston is a large watch. Measuring 64 mm from crown to crown, it still has a surprisingly, comfortable fit. Titanium was chosen due to the metal being light weight. The case includes ergonomic lugs and attached is a big, hand-sewn alligator strap.

The case is carefully hand-beveled and sandblasted. The result is a granular texture that is followed by the NAC galvanic treatment. This process gives the luxury watch a stylish look by coating it with a black metal layer.

Histoire de Tourbillon 6 is an extremely limited series as only 20 pieces are expected to be manufactured. The retail price is around $600,000 US.

Although the cost may be too much for most people, if you are interested in buying one of the new, limited-edition Histoire de Tourbillon 6 watches from Harry Winston, please contact The Life of Luxury. Read about other luxury watch and fine jewelry news, by following this luxury blog. Enjoy life and live a luxury lifestyle!