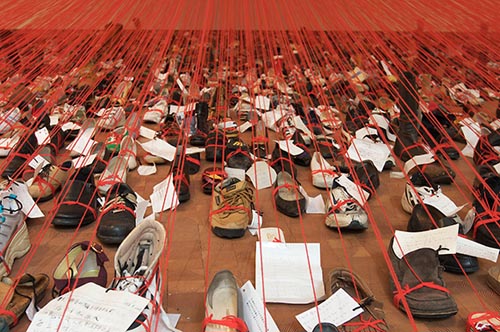 As summer begins to wind down, the Freer Gallery of Art and Arthur M. Sackler Gallery art museums have announced their Fall / Winter 2014 Exhibition schedule.

The Smithsonian Institution features two unique museums of Asian art. The Freer Gallery of Art first opened in 1923 and the Arthur M. Sackler Gallery opened its doors in 1987.

Access to both art museums is a must for anybody who follows and adores Asian art. The Freer Gallery features an important collection of nineteenth century American art punctuated by James McNeill Whistler’s Peacock Room. It is likely one of the earliest art installations on record.

Below is a list of Fall / Winter 2014 Exhibitions at the Freer and Sackler Asian Art Galleries – The Smithsonian Institution:

Unearthing Arabia: The Archaeological Adventures of Wendell Phillips
October 11, 2014-June 7, 2015
Discover Wendell Phillips, who was a young, paleontologist and geologist, and led the largest archaeological expedition to South Arabia (which is actually now present-day Yemen) from 1949 to 1951.

Chinese Ceramics: 13th-14th Century
December 20, 2014-December 2015
Discover ceramic production during the Yuan dynasty (1279-1368) and how the art represents the strength of the international market demand for Chinese wares.

If you are interested in visiting Washing D.C. and touring the Freer Gallery of Art and Arthur M. Sackler Gallery art museums at the world famous Smithsonian Institution, contact us today. The Life of Luxury can assist with your itinerary and make your reservations. If you enjoy reading about art, come back and follow this luxury blog for more art industry news.