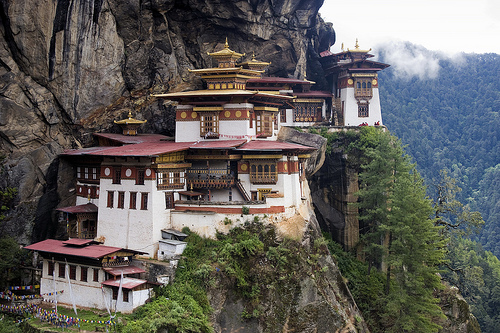 Asia continues to be a popular destination for traveling Americans, Europeans and other regions around the world.

To make your trip more enjoyable and enriching, it’s important to know what to see. Asia has numerous sacred sites and it’s an unforgettable experience to visit any of them.

From the holy city of Varanasi in India, to the world’s largest Buddhist monument in predominantly Muslim Indonesia, to the Emerald Buddha in Thailand, Asia Transpacific Journeys has assembled a divine list of the top ten temples, shrines and places of worship in Asia.

The company has developed a list of top ten sacred sites in Asia.

1. TAKTSHANG MONASTERY (Bhutan) – Bhutan’s most iconic temple and sacred spot, this monastery clings dramatically to a cliff 3,000 feet above the valley floor. Travelers can join locals in hanging Buddhist prayer flags after checking with monks to make sure the date is auspicious.

2. VARANASI (India) – It is said that a ritual cleansing in the holy waters of the Ganges at Varanasi absolves the believer of all sins, enabling a higher birth in the next life. Millions of Hindus make their way here annually.

3. SHWEDAGON PAGODA (Myanmar/Burma) – Sheathed in gold plates and topped by a 76-carat diamond, the great golden dome that rises 322 feet above its base in Yangon is Burma’s most sacred site, visited by Buddhist worshippers and monks daily.

4. DAMBULLA (Sri Lanka) – The most impressive of Sri Lanka’s cave temples, Dambulla is a UNESCO World Heritage site consisting of five caves with over 6,000 square feet of painted walls and ceilings, creating the largest continuous series of paintings in the world.

5. BOROBUDUR (Indonesia) – An absolute must if visiting Indonesia, the reclaimed ninth century ruins are the largest Buddhist monument on earth, and one of the original seven ancient wonders of the world.

6. PASHIPATINATH (Nepal) – The largest temple devoted to the Hindu god Shiva in the world draws devotees from all over the Indian subcontinent. Visitors are likely to witness a fascinating cremation ceremony on the holy Bagmati River.

7. PAK OU (Laos) – A natural cave with more than 3,000 Buddha statues left behind by worshiping kings, merchants and farmers over the centuries, this mystical pilgrimage site is accessible by boat only.

8. DHARAMSALA (India) – The capital of the Tibetan government in exile, Dharamsala is the residence of the Dalai Lama and frequented by pilgrims and visitors from around the world who wish to study Tibetan Buddhism.

9. WAT PHRA KAEW (Thailand) – Located in Bangkok’s Grand Palace and also known as the “Temple of the Emerald Buddha,” this spectacular pilgrimage site is the place where all Thai monarchs have worshiped since it was retaken from the Burmese in the late 18th century.

10. SARNATH (India) – This sacred site near Varanasi, where Buddha is said to have preached his first sermon after achieving enlightenment, draws pilgrims from around the world.

To learn more about traveling to Asia and incredible trip deals and discounts, please email us at: sales@thelifeofluxury.com