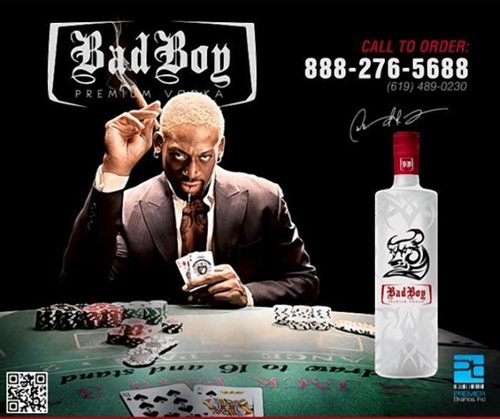 Rodman had a very successful NBA basketball career but also was unknown just as much for his off-court antics.  He  played for several NBA teams including the Detroit Pistons, San Antonio Spurs, Chicago Bulls, Los Angeles Lakers, and Dallas Mavericks.

Premier Brands, Inc. developed the vodka product from inception, and utilized the Hall of Famer’s “bad boy” reputation, by adding a smooth and edgy twist to a classic spirit.

Dennis Rodman had a reputation as a fierce defensive player who also had outstanding rebounding skills. Rodamn was nicknamed “The Worm” and earned the title of NBA All-Defensive First Team honors seven times during his successful career. Dennis was voted NBA Defensive Player of the Year two different times. Add to that five NBA championships and leading the NBA in rebounds per game for a record seven consecutive years and you now know what a tremendous athlete Rodman really was.

When asked about the new vodka brand named after him, Dennis Rodman said, “Bad Boy Vodka characterizes a tough and edgy, yet smooth and classic taste; a perfect representation of whom and what I am all about.”

Never afraid of the attention, Rodman lived a very flamboyant lifestyle as he often dyed his hair in a variety of artificial colors. His body is also covered in numerous tattoos and has many piercings.

The Bad Boy Vodka spirit will be exclusively sold and distributed through Premier Brands’ distribution channels.