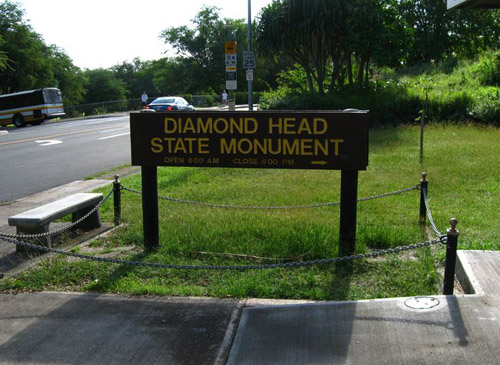 Diamond Head is Hawaii’s most famous landmark. Known in Hawaiian as Le’ahi, so named by Hi’laka, the sister of the fire god Pele, because the summit supposedly resembles the forehead (lae) of the yellowfin tuna fish (‘ahi). It wasn’t until the late 1700′s, when western traders thought they had found diamonds on the slope of the crater, that they began to call it Diamond Head.

But before you head to the Diamond Head State Monument to dig for diamonds, you should know that (to the disappointment of the western explorers and traders) the so-called diamonds were merely calcite crystals, worthless to mine.

The must-do at the Diamond Head State Monument is the short hike through old military bunkers. (Bring water and a flashlight.) The historical trail to the summit is an easy 1.4 mile hike that climbs an elevation of 560 feet and ends with sweeping views of the Honolulu area.

There are handrails, plenty of places to rest, and places of interest, so allow 1.5 to 2 hours for a leisurely round-trip hike. Also, bring a flashlight because portions of this trail go through long, dark tunnels. Amazingly, some locals and visitors jog up and down Diamond Head for exercise.

To get to the access road to the trail, follow Kalakaua Avenue to Kapiolani Park. Go north on Diamond Head Avenue to 18th Avenue.