“Winter Wonderland” – An Incredible Journey on the Trans-Siberian Express 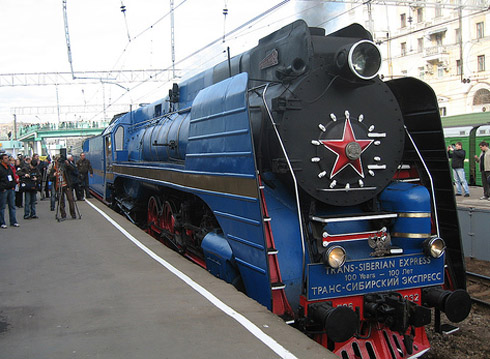 It used to be the other way round, but these days people are clamoring to get into Siberia. In fact, The Great Canadian Travel Company has had such a high demand for its journey by private train over The Trans-Siberian Railway that it has been recommending early booking.

Unquestionably, it is one of the world’s most famous rail journeys-of the kind that seem to contain a lasting fascination for the traveling public.

Journeying almost 6,000 miles over the longest continuous rail line on earth, the Trans-Siberian Express travels through the Urals and the vast expanses of Russia, to connect Moscow in the west with the Pacific port of Vladivostok, on the Sea of Japan.

Begun in 1880 by Tsar Alexander III and continued by son Nicholas, The Trans-Siberian Railway was completed in 1905. It provided an essential link to Vladivostok, a major international trading port and headquarters of the Russian Pacific fleet.

Today’s journey recalls the opulence enjoyed by the Tsars. Passage is via comfortable private train cars-classic Russian rolling stock-attached to scheduled trains. It’s a 14-day journey that operates in both directions and offers an incredible, rare perspective of this vast, beautiful country, taking passengers through Europe and Asia, crossing the storied steppes and the vast taiga of Siberia, the world’s largest forest.

Join a special westbound journey this winter from Vladivostok to Moscow on the Golden Eagle Trans-Siberian Express. Witness the winter beauty of Dr. Zhivago landscapes from the warmth of a luxurious private train. Stop to enjoy such diverse pleasures as sleigh rides, choirs and ice-fishing. So that tour members can learn even more about this fascinating land, the BBC’s World Affairs Editor, John Simpson, CBE, will be on the train for its entire journey.

Other highlights of the journey will be travel into Mongolia, home of Genghis Khan, the most feared and revered Mongol leader. Lunch is taken Mongol style with local food and entertainment. You’ll also spend time at frozen Lake Baikal, the world’s deepest, where an ice ride awaits via snowmobile or dog-sled. Freshly-caught fish are smoked in a mobile smokehouse and served warm with ice-cold vodka.

There’s culture to absorb at Irkutsk, the “Paris of Siberia,” where you’ll enjoy a folkloric concert, with drinks and traditional food presented within a series of cozy timber houses. Ahead is the modern “Soviet” city of Novosibirsk, with a rich culture that encompasses two permanent ballet and opera companies and the largest opera house in the world.

There’s a stop at Ykaterinburg, capital of the Urals, the city where Tsar Nicholas II and his family met their end. An imposing statue of Lenin offers a fine “photo op.”

As you near the end of your unique rail journey, you’ll visit the historic city of Vladimir, one of Russia’s oldest. Its cathedral, built between the twelfth and fifteenth centuries, is considered one of the most important and beautiful in Russia. It is where many prominent Tsars were crowned. Fittingly, the tour ends in Moscow, with time spent taking in the sights of Red Square.

This two-week adventure is offered by The Great Canadian Travel Company, North America’s foremost experts in travel to some of the world’s least-traveled regions. Its packages include adventures in Iceland, Greenland, Alaska, the Canadian Arctic and, quite literally, to the “top of the world” as travelers crunch their way through pack ice to the North Pole.

Cost of this trip is US$7,995 per person (twin-share), a price that includes guided off-trail excursions, all accommodation and meals and a general allowance of drinks with lunch and dinner—plus transfers, porterage, all gratuities and services of an experienced tour manager.

Trip dates are February 18 – March 3, 2010. Note: a US$500 per person credit incentive is designed for passengers to use against additional services such as international flights, extra nights and tour extensions. (Passengers also receive special Russian hats, gloves and boots to keep them warm in the Siberian winter-and are theirs to take home.)