Celebrate the 75 Year Anniversary of the Golden Gate Bridge 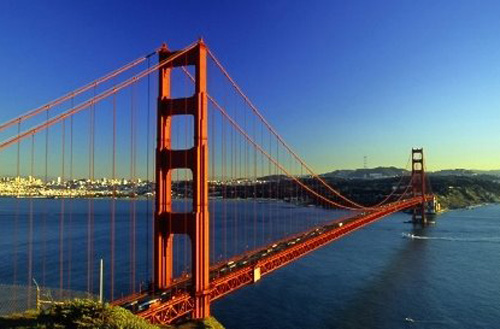 On May 27, the city of San Francisco officially kicks off its year-long celebration of the 75th anniversary of the iconic Golden Gate Bridge.

The majestic Golden Gate Bridge has long been a symbol of not only scenic San Francisco, but a tremendous engineering accomplishment and American ingenuity.

The Golden Gate Bridge was first opened to automobile traffic on May 28, 1937, and quickly became one of the world’s most popular suspension bridges. Whether you walk, jog, bike or drive your car across the Golden Gate Bridge, it usually tops the list of things to do while visiting San Francisco. 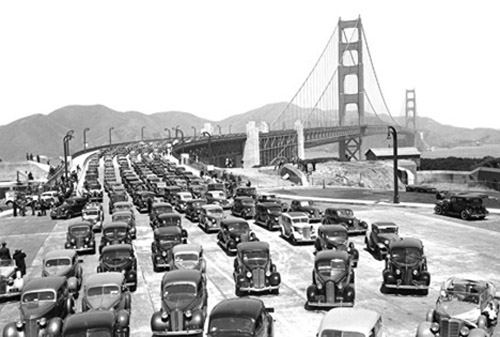 As part of the 75 year anniversary celebration, tomorrow San Francisco presents a new 3,500 square-foot Bridge Pavilion that will be open to the public.

On May 27, there will be a full day of events throughout San Francisco in honor of the 5th Anniversary of the Golden Gate Bridge.

Courtesy of San Francisco Travel Association, which is the official tourism marketing organization for the City and County of San Francisco, below is a sample of the many events visitors and locals can enjoy and celebrate this momentous occasion.

Sunset cruise under the bridge
Red and White Fleet

This month, the Red and White Fleet — a collection of historic ferry boats that cruise the San Francisco Bay— will offer a “Golden Gate Bridge California Sunset Cruise” to celebrate the bridge’s anniversary.  During the two-hour cruise, passengers will enjoy views of the city’s sunset over the Pacific Ocean, live music and a buffet of appetizers, as well as beer, wine and soda from ship’s bar.  For those on the cruise on May 27, the date of the bridge’s public celebration, passengers will have an up-close and personal view of the fireworks under the bridge starting at 9:30 p.m. Adults (18 years old and up) are $54; youth (five to 17 years old) are $36; and children (under five years old) are free. Media contact:  Molly Blasdell, mollyb22@gmail.com, (925) 300-7252.

Presented with the Walt Disney Family Museum, the Golden Gate Bridge film festival, “The Bridge on the Big Screen: Movies Starring the Golden Gate Bridge,” will feature seven popular movies showcasing the “international orange” icon. The first three films will be screened outdoors on the new Presidio Main Post Green; the final four films will be screened indoors at the Walt Disney Family Museum theater. Bridge-themed movies will be shown each Saturday through Sept. 15, 2012. Programs begin at 6 p.m.; admission is free; visitors are encouraged to bring a blanket, lawn chair and picnic for outdoor screenings.  Note:  refreshments will also be available from Off the Grid Food Trucks, the Disney Café, and the Presidio Bowling Center. In addition, moviegoers can take advantage of extended hours at the Walt Disney Family Museum. The series kicks off May 26, 2012 with the 1955 film, “It Came from Beneath the Sea.”  For more information, visit www.presidio.gov/GGB75.

A celebration of an era
Clift San Francisco, 495 Geary St.,

From May 25-27, 2012, the Clift San Francisco will be hosting a 1930s inspired weekend to celebrate the 75th anniversary of the Golden Gate Bridge.  With no entry charge, the evening events will include live music, 1930’s-themed cocktails, and vintage films from the era. Media contact: Erin Janzer, Syndicate Media Group, erin.janzer@syndicatemediagroup.com, (310) 691-8575.

To honor the 75th anniversary of the Golden Gate Bridge, Kimpton’s Hotel Palomar San Francisco is offering a new “Golden Gate Suite” filled with art by local artists that honor the Golden Gate Bridge, including furniture made out of reclaimed steel from the bridge. Guests staying in the “Golden Gate Suite” will receive a complimentary Golden Gate cocktail from Fifth Floor restaurant, the restaurant at Hotel Palomar San Francisco. The cocktail, called Vermillion M.E.S., gets its name from the Orange Vermillion color painted over the steel, chosen by architect Irving Morrow.  Media contact: Anna Morris, Seahorse PR, anna@seahorsepr.com, (415)278-1515.

For more information on reservations, packages, activities for the 75 Year Anniversary of the Golden Gate Bridge in San Francisco, please visit www.sanfrancisco.travel or call 415-391-2000.