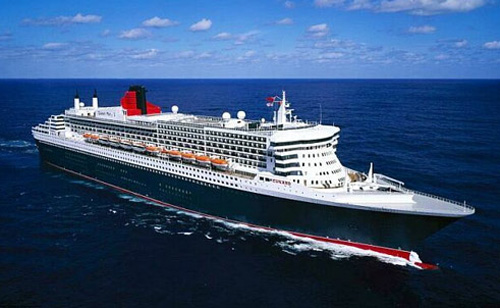 It’s still one of the most highly kept secrets in the travel industry. But the iconic QE2 (Queen Elizabeth 2) luxury cruise ship which is currently moored in Dubai, is scheduled to set sail next year and be introduced as an all-suite luxury hotel.

According to Emigrates 24/7, the QE2 luxury liner will be moored somewhere in the Far East, but it’s actual and final destination is a top secret.

The QE2 will depart Dubai on October 18 and should reach Singapore on November 1. The cruise ship will then leave for a shipyard in China to finish its restoration.

The luxury cruise liner will morph into a spectacular, 400 all-suite hotel. For those who desire an extended stay, there will be larger suites to meet that longer, onboard need.

Khamis Juma Buamim is the Chairman of Drydocks World and Maritime World and stated that approximately $90 million (Dh330 million) will be spent on refurbishing QE2. To date, seven of the ship’s nine total engines have been overhauled.

Buamim was quoted, “Dubai owns the QE 2 and will never sell it. People can rent or even buy these suites. Prices haven’t been finalized but these will be really expensive.”

The QE2 has long been regarded as the last of the great luxury liners. Over the 39 years of service for Cunard, she carried 2.5 million passengers, sailed almost six million miles and finished 806 trans-Atlantic crossings.

Istithmar World is a subsidiary of Dubai World and bought the 293-metre long vessel from Cunard for about $100 million in June 2007. QE2 officially retired in Dubai back in November of 2008.

Initially, the luxury ship was planned to stay in Dubai as a luxury hotel and part of a maritime center. Now those plans have changed, but don’t rule out the possibility that the ship won’t eventually return to Dubai.

Khamis Juma Buamim continued, “Dubai is the home of QE2. You never know it may come back.”

If you are interested in learning more about the new QE2 and making a reservation for a stay in 2014, please contact one of our concierge reps at The Life of Luxury.