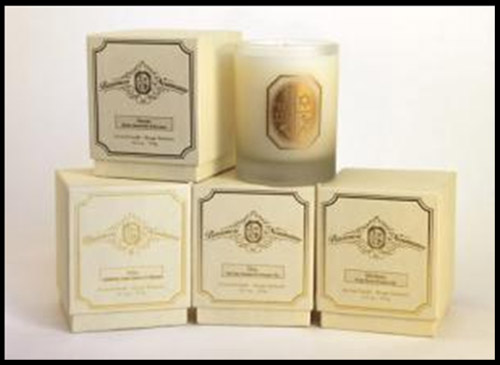 There is nothing like the allure of candles to help create a romantic mood or generate an enjoyable fragrance in your residence.

Baroness Monica von Neumann is a businesswoman, tastemaker and former Dior and Yves St. Laurent model. She has well known among the most elite circles of society as a true authority on everything “luxury” from dining to decorating, travel to etiquette, jewels to sports cars.

These are not your average, boring looking and smelling candles, but these classy candles truly construct an entire sensory environment that is sure to please.

· A 70+ hour burning time–longer than most of comparable size.

· An all-natural soy-based wax and cotton wick that burns cleanly without the creation of soot that can cause discoloration on walls and ceilings.

· The candles are available to ship nationwide from von Neumann’s website (www.baronessmonicavonneumann.com), and at Candle Delirium in West Hollywood, California, with wider distribution planned in the coming months. The luxury candles retail for $38.50 each.

The candles come in four incredible scents that range from the simplicity of French soap to the sophistication of mahogany.

The Baroness von Neumann candle collection takes you on a journey around the world. Her scents are inspired by romantic, exotic locales and each candle balances the modern with the classic, expressing a fresh, mysterious and regal milieu.

The Baroness has experienced the world in style, and is an avid world traveler and journey the globe by yacht and private jet.

Due to her experience and knowledge of all that is luxury, Baroness Monica von Neumann has proudly contributed to People, Genlux, and Indulge Magazines, in addition to starring in her own web series, produced by Extra.

The candles retail for $38.50 each and can be purchased at – Candles by Baroness Monica von Neumann