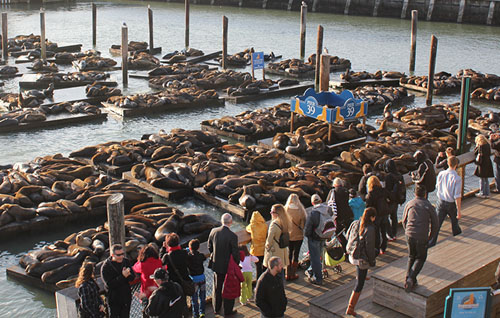 It’s hard to deny the cuteness of California sea lions basking in the sun. San Francisco is celebrating the 26th anniversary of local sea lions making the world famous Pier 39 their home.

But there’s a little more to this story than you think. The San Francisco Bay Area was hit with a large earthquake on October 17, 1989. Many of you may remember the Loma Prieta earthquake occurred during Game 3 of the baseball World Series between the Oakland A’s and San Francisco Giants. The series was titled the “Battle of the Bay.”

The 6.9 magnitude earthquake killed 63 people and injured almost 4,000. But a fascinating event amidst the damage and chaos occurred. California sea lions suddenly began appearing at Pier 39 in the Marina. By January of 1990, greater than 500 California sea lions had surprisingly arrived. The Pier 39 K-Dock became their new home and provided bountiful food from San Francisco Bay. The mammals also enjoyed a protected environment.

Based on a recommendation from The Marine Mammal Center, the cute California sea lions were allowed to stay. They have been a popular, Pier 39 attraction in Francisco ever since. Now 26 years later, literally millions of tourists and Bay Area locals have enjoyed viewing the California sea lions in person. 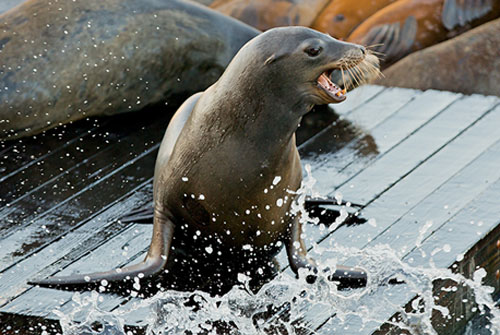 Pier 39 is an open-air marketplace with two levels. Encompassing 45-acres, the waterfront complex features over 120 restaurants, shops and attractions. It’s one of the most popular sightseeing stops for visitors to the scenic, City by the Bay.

From January 15 to 18, you can celebrate the sea lions with free Sea Lion Encounter Walking Tours. Each tour lasts about 20 minutes and is very educational. You’ll learn information about the California sea lions plus receive discounts for Pier 39 businesses. The tour ends at the Sea Lion Center and you can enjoy special exhibits from The Marine Mammal Center and Aquarium of the Bay.

The popular Aquarium of the Bay features two incredible, clear acrylic tunnels. The tunnels hold about 700,000 gallons of salt water and marine life from the San Francisco Bay.

The tours begin at the Sea Lion Statue west of the Pier 39 Entrance Plaza at 12pm, 2pm and 4pm. This year’s Sea Lion Anniversary is included along with a Pier 39 campaign, with a goal of supporting the Sea Lion Center’s educational programs. In addition, they hope to continue educating people on creating and maintaining sustainable environments for sea lions around the world. The Sea Lion Center is open daily between the hours of 10am and 4pm.

If you would like to support the pier’s Sea Lion Center’s free daily presentations and classroom programs for students and visitors, please feel free to make a donation. Your money will help continue all the wonderful efforts that have been accomplishments so far.

Plan a visit to San Francisco and visit Pier 39 and see the California sea lions up close. Also stop in The Sea Lion Center and Aquarium of the Bay. The Life of Luxury can help plan and book your travel itinerary. If you enjoy reading about luxury travel ideas, the follow this luxury blog for more great ideas.