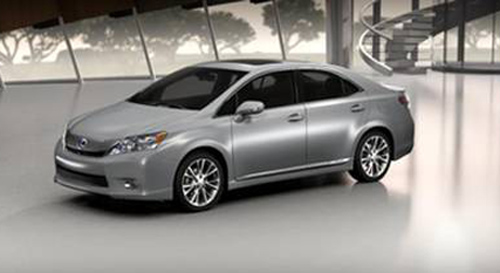 If you are looking for an awesome hybrid car plus contributing to a worthy cause, go to Charitybuzz.com for a chance to bid on a new 2010 Lexus HS 250h.

The 2010 Lexus HS 250h is part of the Christie’s Green: A Bid to Save the Earth online auction. Charitybuzz auctions VIP experiences and luxury goods on its web site to raise millions for nonprofits around the globe.

The luxury 2010 Lexus HS 250h is the most fuel efficient Lexus ever built with a combined 35 MPG rated HS Hybrid that is over 59% more fuel efficient than other luxury competitors.

The car has a 2.4 Liter 16-valve Atkinson-cycle powerplant at the heart of the Lexus Hybrid Drive system.

30% of the combined interior is covered with ecological plastics which are plant rather than petroleum based so they are less harmful to the environment.

Christie’s, the world’s leading art business, is spearheading one of the most buzzed about campaigns honoring the 40th anniversary of Earth Day – The Green Auction: A Bid to Save the Earth (www.abidtosavetheearth.org).

For a full description of amenities, please click here: http://www.charitybuzz.com/catalog_items/2000209