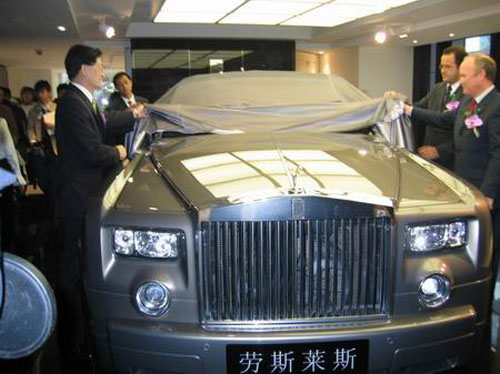 There is a luxury car boom going on in China and there is no end in sight. Racing down the crowed streets of  Beijing, Shanghai and other Chinese cities are luxury cars form Aston Martin, Bugatti, Lamborghini.

As the Chinese economy continue its torrid pace, many are becoming millionaires and spoiling themselves with the riches of own a luxury car.

Many of the most luxurious sports cars manufacturers in the world, have recently opened new showrooms in thriving Beijing. The glittering showrooms can be found on famous Jinbao Street.

Beijing is the favorite destination for China’s rich to shop. The city is also home to the largest number of super rich in the country. According to China’s Hurun Report there are an amazing 8,800 billionaires and 143,000 millionaires in Beijing. Most of wealthy own between a minimum of two to five luxury cars.

The world’s economic problems have not hit China nearly as bad. With sales down in the rest of the world due to the current global recession, China is actually seeing a boom in car sales across the country. The wealthy, Chinese elite are even trading up and purchasing  more exotic cars.

China is clearly in the bulls eye of all luxury car makers, who expect China to lead them to higher sales in the coming years. It’s been reported that China is currently either the number one or two market for most car brands.

For example, iconic Lamborghini soon expects China to overtake Italy and capture the two spot, behind only the United States. In 2009, Lamborghini sold about 80 cars in China, out of the 2,000 total sold globally.

Beijing’s crowed streets may be a factor in future sales. The city has an incredible population of 17.5 million people and there are already over four million cars on its roads.

Whether the ultra-rich drive their new luxury cars in Beijing, Shanghai or out in the open country, luxury cars sales will continue to surge in China.