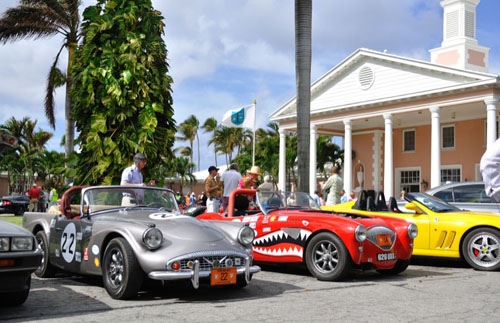 The Bahamas Speed Week Revival was a very popular event back in the 1950s and 1960s bring the flare of car racing to this Caribbean country. The race returned to Nassau in 2011 and next week the city is proud to host it once again.

The third annual Bahamas Speed Week Revival will be held in this tropical getaway between Dec. 4 and 8, 2013.

Speed Week expands beyond past year’s programs with a Formula Junior race, an Austin Healey race, a classic/vintage Mini race and now also an Allcomers race for classic/vintage racers.

Vintage race cars with track records that include victories in some of the world’s most celebrated races will be on display in the Nassau circuit. A few of the featured in Speed Week 2013 will be :

· Ferrari Dino 206 Prototype – Presented by returning entrant Andreas Mohringer from Austria in his Ferrari Dino 166/206 Prototype. The car is ripe with Speed Week history, having been raced in the 1965 event by the Mexican Rodriguez brothers.

· Maserati 200S – This limited edition build was made by Maserati of Italy as a 1955 racing car. Italian entrant Mikel Willms will bring one of the twenty-eight existing models to Speed Week 2013.

· Ferrari 250 GT Lightweight Boano – a Speed Week classic, this car left the factory on Nov. 7, 1956, in the ownership of Jan de Vroom and was shipped directly to the Bahamas from Italy specifically to compete in Speed Week. It returns to the revival following restoration and certification and will be driven by Belgium entrant Theo Spooren.

For additional information about attending the Bahamas Speed Week Revival in Nassau and booking your travel reservations, please contact The Life of Luxury.