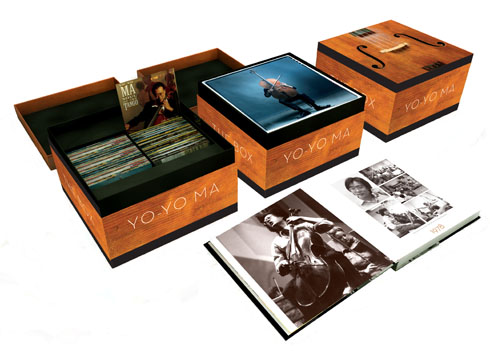 Box Sets used to run into the thousands, but this year, prices for many collections don’t come close to that – no doubt a result of the current economic recession.

For the majority of music fans, this is great news when looking to purchase some of their favorites, but there are still some out there that they’ll have to drop serious coin on.

Check out our list of most expensive box sets for 2009 – ranging in genres from classical to rock, these sets include products from books and DVDs to original artwork and even x-rated goods! (blame it on Rammstein.)

The Pixies: Minotaur Box Set
Price: $753.98
This box set features all five of the band’s studio albums — Come On Pilgrim, Surfer Rosa, Doolittle, Bossanova and Trompe le Monde — on 24K gold-plated discs and 180-gram vinyl. It also includes a 96-page fine art book and a 52-page photo book, a bookmark signed by all the members of the Pixies, two double-sided posters and a Giclee print of some of Oliver’s art. Topping it all off is a DVD and Blu-ray with all five Pixies albums on 5.1 Surround Sound Mix, an unreleased 1992 concert from London’s Brixton Academy and all of the band’s music videos.

The Beatles: Stereo Box Set
Price: $661.98
This is the 2009 Japanese remastered box set.It includes 16 discs along with a DVD. Also includes a bonus Japanese text booklet & OBI. The stereo remastered versions of these 13 studio albums along with the Past Masters CD are all included. There’s also a lot of extras included in this box set such as a DVD which includes a short documentary on the making of each album.

Abba: Paper Sleeve Box
Price: $507.99
Be the complete Abba fan with this Deluxe Limited Edition 9 CD Box Set, with each disc presented in Paper Sleeves. All 8 albums are here, along with a bonus disc exclusive to this box set!

SBB: Anthology 1974-2004
Price: $340.99
A Box Set containing 22 studio & live albums by SBB. The last 2 albums are compilations of rare & unreleased tracks with guest musicians such as Tomasz Stanko. Those 2 CD’s are available ONLY in the box set. Limited edition (only 1000 copies released).

The Beatles: USB Box Set
Price: $229.99
The apple-shaped USB drive is loaded with the critically acclaimed re-mastered audio for The Beatles’ 14 stereo titles, as well as all of the re-mastered CDs visual elements, including 13 mini-documentary films about the studio albums, replicated original UK album art, rare photos and expanded liner notes.