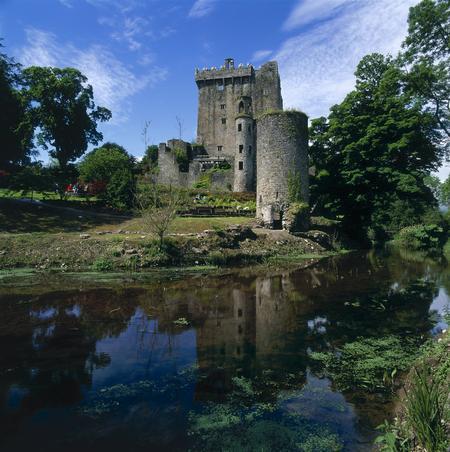 Happy St. Patrick’s Day to every one.  In celebration of this festive Irish day, let’s take a look at Ireland and the famous Blarney Castle and Blarney Stone.

Blarney Castle was originally a timber hunting lodge built in the 10th century, which was replaced by a stone castle in 1210.  The present day castle was completed by Dermot McCarthy, King of Munster in 1446.

Following the epic Battle of the Boyne in 1690, all Irish chiefs were stripped of their powers and the McCarthys were again forced to leave Blarney Castle.  The Castle was then sold to Sir James Jefferyes, Governor of Cork in 1703.  The Castle is currently owned and managed by the Trustees of the Blarney Castle Estate.

The famous Blarney Stone is a stone set in the wall of the Blarney Castle tower, in the ancient Irish village of Blarney.  The walls of the castle are 18 feet thick.  The stone is believed to be half of the Stone of Scone which originally belonged to Scotland.

Scottish Kings were crowned over the stone, because it was believed to have special powers.   One of the stories says that an old woman cast a spell on the stone to reward a king who had saved her from drowning.  Kissing the stone while under the spell gave the king the ability to talk sweetly.  He was able to talk anyone into doing things.

The stone was given to Cormac McCarthy by Robert the Bruce in 1314 in return for his support in a battle.  Queen Elizabeth I wanted the Irish chiefs to agree to hold their own lands under title from her.

Cormac Teige McCarthy, the Lord of Blarney, handled her every Royal wish with clever promises keeping loyalty to the Queen without “giving in”.  Elizabeth proclaimed that McCarthy was giving her “a lot of Blarney.”

This is how the story began that if you kiss the blarney stone you will also be able to make clever promises.