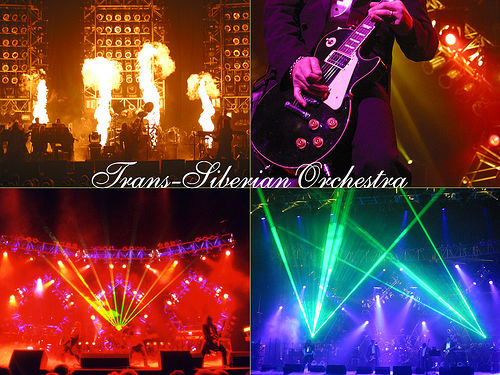 The incredible Trans-Siberian Orchestra is a rock orchestra founded by Paul O’Neill, Robert Kinkel, and Jon Oliva in 1996. O’Neill had managed and produced rock bands including Aerosmith, Humble Pie and Scorpions, later writing for and producing Savatage, where he began working with Kinkel and Oliva.

The roots of TSO are found in Savatage, a traditional heavy metal band that gradually progressed into an operatic metal act. Savatage’s rock operas, starting with STREETS, began the experimentation with what would become TSO culminating on the track “Christmas Eve Sarajevo 12/24” from DEAD WINTER DEAD. This track was a minor hit for the struggling band, and demonstrated that there might be an audience for the symphonic metal approach to holiday themes.

The concept for a band playing Christmas carols in a rock opera style was not received warmly by the industry, but quickly proved a success with adults as well as young people.

In 2001, TSO released The Ghosts of Christmas Eve, followed by The Lost Christmas Eve in 2004. Also in 2004, the band released a box set titled, The Christmas Trilogy. Trans-Siberian Orchestra is currently working on a new release, Night Castle.

Seeing Trans-Siberian Orchestra in concert is a must. Their shows are an amazing array of lights, lasers and music. First timers will never forget the moving experience. Loyal concert returners will remember why they keep coming back for more TSO, year after year.