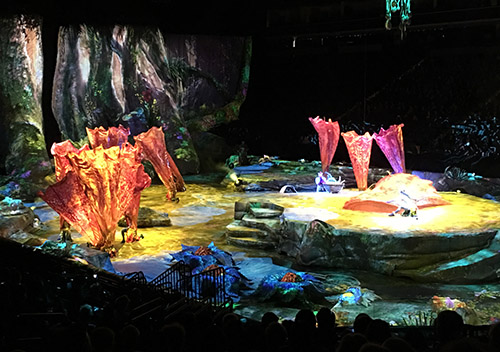 When the name Cirque du Soleil is mentioned, people often smile and describe incredible shows with talented performances and amazing sets. Cirque du Soleil is the largest theatrical producer in the world and their latest touring show is Toruk – The First Flight.

Toruk – The First Flight is inspired by the blockbuster movie Avatar. Written, directed, produced, and co-edited by talented James Cameron, it was a huge worldwide phenomenon. The movie hit theaters in 2009. In fact, Avatar is still the highest grossing movie ever with about $2.782 billion in worldwide revenue.

Like the Avatar movie, Toruk – The First Flight is set on the distant moon named Pandora. The name “Toruk” is derived from the dragon-like monster featured in the touring show. Avatar was based in 22nd century Pandora, this show is set in prehistoric Pandora, about 3,000 years earlier.

“Toruk” is stunning from a visual standpoint. It’s a stunning spectacle for the senses, with over-the-tops sets and engaging, tribal music. 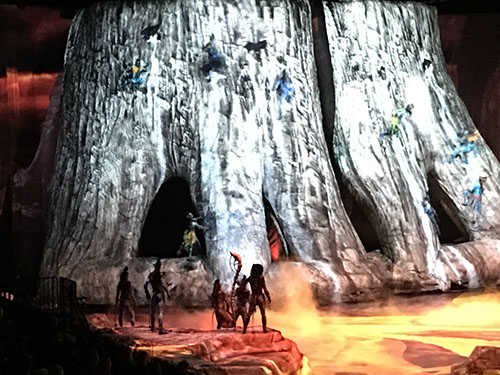 Living on Pandora moon are the Na’vi. These people are the animated blue creatures we will come to love. Omaticaya is local a clan and we meet both Entu and Ralu. These two characters partake in a ceremony that is part of growing up. They climb, swing and perform a dazzling rope exercise while suspended over a pseudo fire pit.

Next, we learn from a shaman from the Omatikaya tribe, that a catastrophic lava flow will destroy the Tree of Souls. This is large natural disaster that devastate everything in its path.

The mission of the small Na’vi clan and central theme of Toruk – The First Flight is to save the socially important Tree of Souls. Their journey is to find the Toruk – a gigantic, flying dragon to save Pandora. Along the way, Entu and Ralu meet a young woman named Tsyal.

Directed by talented Neilson Vignola, the show’s stage is massive and emcompasses the entire area floor. From touring mountains to lush jungles and massive waterfalls, the scenery is amazing. The show a multimedia production on steroids. Using 40 video projectors, Vignola and Cirque du Soleil created a visual masterpiece. The set’s surface area covers about 20,000-square feet. 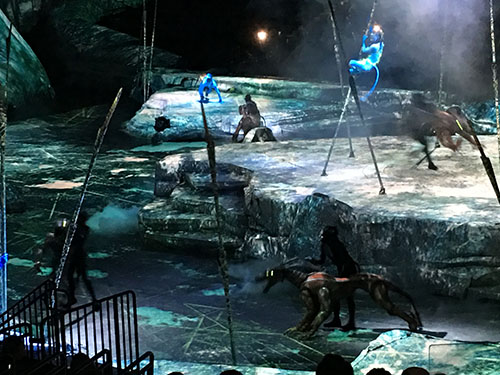 In true Cirque du Soleil fashion, Toruk – The First Flight showcases many talented performers. In one scene, about three dozen Na’vi all perform across the arena floor in full blue bodysuits and elaborate face paint. It’s a array of running, tumbling, jumping and aerobatics. When finished, the large crowd gave a thunderous ovation.

One of my favorite scenes was when the large flood emerges. Beginning in the crowd, the overhead projectors create the illusion of moving water at as it slowly moves across the set. Crashing waves and sound effects leave the crowd in awe.

Another memorable scene was when scattered bones were put together to create the dinosaur skeleton. The characters climb and move around the skeleton, which resembles a seesaw. Using balance and nimble moves, they perform up and down the dinosaur’s vertebrae.

Furthermore, an additional hi-tech feature of the show was to integrate the audience into the performance. Therefore, you are encouraged to download a the Toruk app and join along the journey. Audience members get text message telling them what to do next. In addition, you also get access to unique backstage videos and photos. 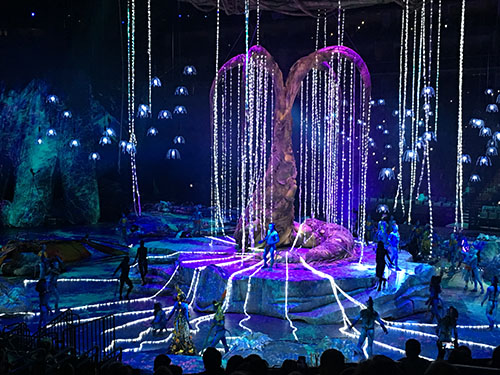 Many of the past Cirque du Soleil shows have an circus theme with high-wire acts, trampolines and high-octane gymnastics. Toruk – The First Flight is not like that. Even with the action, the show seems to accept its slower pace. Expect the highlights to come from the visual stimulation and story line as we follow the challenging journey of Entu, Ralu and Tsyal on prehistoric Pandora.

For Avatar fans, it’s been publicized that a series of sequels will be made. Targeted for late 2018 will be part 2. James Cameron will be part of all 4 movies currently scheduled.

If you would like to attend Toruk – The First Flight or any Cirque du Soleil show around the world, contact The Life of Luxury. Our concierge specialists can get you the best seats. Be sure to come back again soon, to read our luxury blog.

Photos: The Life of Luxury