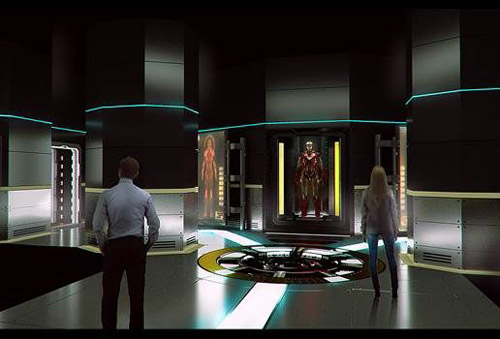 The new Marvel experience is based on the record breaking Hollywood movie series – Marvel’s The Avengers. The exhibition is a result of a creative collaboration between Marvel Entertainment, Victory Hill Exhibitions, the National Aeronautics and Space Administration (NASA) plus the National Academy of Sciences.

The incredible Marvel’s Avengers S.T.A.T.I.O.N. exhibition will be located at Discovery Times Square in New York City and premieres this Friday, May 30, 2014.

Now you can morph into the world of The Avengers with this incredibly immersive, interactive exhibit experience!

ride that brings the science behind Marvel Super Heroes to life. Gamedesk is leading EdTech innovator and developed S.T.E.M. which stands for – Science, Technology, Engineering, and Mathematics specifically for this exhibition.

As part of the experience, you’ll interact with various Marvel’s The Avengers characters, including: Iron Man, Captain America, The Hulk, Thor, plus others.

Uncover the secret origins of these fictional characters. It’s a deep dive into the world of Marvel Cinematic Universe. You can discover a wide variety of classified studies, intelligence files, in addition to amazing experiments that helps define who these characters really are and how they came to be.

For those fans who remember the mighty Battle of New York, you’ll be granted secret access to some of S.H.I.E.L.D.’s most highly guarded, recovered artifacts. For example, view first hand – Loki’s Scepter, the Tesseract Portal Device, Captain America’s Birth Pod, plus the hermetically sealed Chitauri.

You’ll feel you’re really involved in a simulated recruitment, just like being trained as a top agent of S.H.I.E.L.D.

For astronomy lovers, visitors can map out the stars to find Asgard. In addition, other exhibits include learning how to operate the suit worn by Iron Man, personally test your physical abilities against Captain America, and even view the neurological effects when mild Bruce Banner transforms into the great green, beast – the Hulk.

The new Marvel’s Avengers S.T.A.T.I.O.N Exhibition in New York City should not be missed. It will leave you with a lasting impression and memories of being superhuman for a day.

Marvel’s Avengers S.T.A.T.I.O.N. tickets are now available for sale at the box office or online at: http://www.discoverytsx.com/exhibitions/avengers

To experience the Marvel’s Avengers: S.T.A.T.I.O.N. exhibition but don’t live in New York City, please call us today to help plan and book you travel itinerary. You want to receive exciting news like this? Then follow our luxury blog each day for the latest announcements from The Life of Luxury.