The LFA is the First Supercar by Lexus 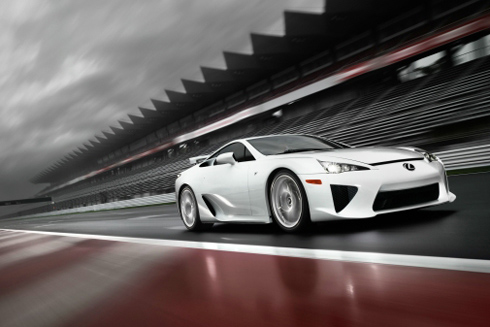 Lexus announced that their luxury LFA Supercar will go into production this December. Orders are now being taken at http://www.lexus.com/LFA/.

The launch of the LFA high-performance supercar, illustrates a strategic move by Lexus as it enters the exotic sports car market alongside such legendary names as Ferrari, Lamborghini and Aston Martin.

The LFA will offer a bold design structure with an intensely powerful engine that is unlike any other Lexus vehicle on the road today. Lexus is redefining the supercar for the 21st century.

The Lexus LFA supercar will be on display for the first time in North America at two back-to-back premier venues – the 2009 Specialty Equipment Market Association (SEMA) trade show in Las Vegas this November and the 2009 Los Angeles Auto Show in December.

As the first Lexus supercar, the LFA serves as the flagship for the F portfolio of Lexus performance models and redefines the supercar for the 21st century. The Lexus F brand complements the core Lexus DNA by emphasizing serious performance. The LFA was carefully developed from a blank canvas by a small and dedicated team of hand-picked engineers that pushed every possible dynamic boundary.

“The development of the LFA was unlike any other Lexus,” said Mark Templin, Lexus division group vice president and general manager. “Minute details were engineered to provide an engaging and serious supercar that delivers impressive performance on and off the race track. Only 500 will ever be built worldwide, and each will be assembled to customer order, offering a once-in-a-lifetime chance to be part of a small, exclusive group of individuals.” 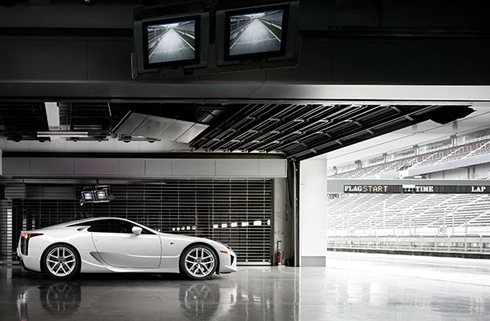 All 500 LFA supercars will be hand-assembled by skilled technicians in the “Lexus LFA Works” at the Motomachi Plant in Toyota City at a rate of no more than 20 per month.

Linked by a rigid torque tube for excellent drivetrain integrity, the ASG is located in a transaxle layout over the rear axle for an optimal 48:52 front-to-rear weight distribution. Motorsport-developed lightweight aluminum alloy suspension components are complemented by Carbon Ceramic Material (CCM) brake discs and an innovative electrically assisted rack and pinion steering system.

Lightweight, powerful and balanced, the LFA features advanced Carbon Fiber Reinforced Polymer (CFRP) construction for its chassis and much of its bodywork to deliver a light, incredibly strong and impact-resistant structure. Rather than outsource this sophisticated materials technology, the LFA team took the radical step of developing its own CFRP processes internally for ultimate quality control and to make a sound engineering investment in the future.

The LFA’s sporty styling is distinguished by coherent lines that flow from roof to sill in a seamless convex to concave line for sophisticated aerodynamics. Its front-mid engine layout, long wheelbase, short overhangs, and snug, low-slung cabin identify it as a supercar.

CFRP also gave the LFA’s designers a far higher degree of design freedom, allowing them to create shapes, curves and edges that would have been impossible with metal. For example, the sharp trailing edges at the rear of the LFA that help provide superlative aerodynamics would not have been possible had traditional metal been used for the bodywork.

A dramatic low-slung cockpit has been intelligently designed and hand-assembled with the finest materials to reflect the car’s driver-centric dynamics. The intimate two-seat cabin has been conceived at every stage – ergonomics, acoustics, materials, comfort, versatility and visibility levels have all been painstakingly engineered – to put the driver at the center of the driving experience.

Production of the LFA supercar will begin in December 2010 with deliveries continuing for the following 24 months.

Consumers may contact the Lexus LFA Information Center at 866-LFA-4794 to express interest, or visit www.Lexus-LFA.com for more information.