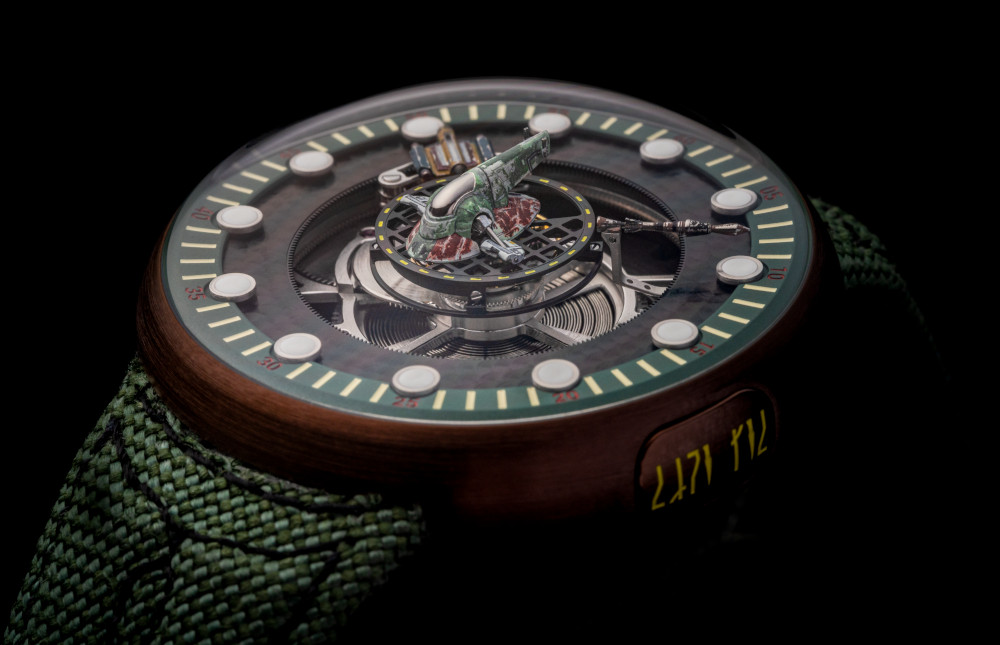 Kross Studio releases an amazing Boba Fett Collector Set. This watch collection is inspired by the legendary Star Wars bounty hunter. Each watch in the 10 limited-edition set includes a numbered Boba Fett-inspired tourbillon Watch. Plus, you get a Boba Fett Starship-inspired watch display.

Boba Fett is one of the most popular characters in the Star Wars galaxy. The Kross Studio creation is a result of a collaboration with Lucasfilm. The Swiss design studio is proud to reveal a new and limited edition of ten Boba Fett-inspired collector sets. Therefore, each is complete with a numbered, manual wound Boba Fett-inspired central Tourbillon timepiece and a watch display by EFX. Both inspired by the iconic Boba Fett starship.

A Timepiece for the Galaxys Most Famous Bounty Hunter

Each Boba Fett watch set is composed of eight pieces. Each miniature tourbillon resembles Boba Fett’s firespray starship. They are meticulously engraved and hand painted to mimic the weathered appearance of Boba Fett’s ship. Hence, how they appear in Bespin at Cloud City, in the Star Wars film saga. Therefore, the level of detail is incredible. Thus, it highlights the unique savoir-faire perpetuated by artisans in Switzerland. Interestingly, it took 90 hours to make each of the ten pieces.

Kross Studio has employs a unique peripheral format for reading the hours and minutes. View them through a planetary gear system that orbits 360 degrees around the tourbillon. In addition, a 12-factor gear ratio allows the planetary minutes system to empower the progression of the hours. Thus, in order to optimize the movement’s efficiency as much as possible, the hour and minute display system is fixed on two very wide and high-precision ball bearings. Plus, the hour hand is inspired by Boba Fett’s jetpack and the minute hand by its rocket, two iconic items that the bounty hunter carries permanently.

The lack of a visible crown means case’s perfect symmetry can be seen. This is due to ingenuous Kross Studio D-ring crown system. As a result, the crown is on the case back. Plus, the barrel’s mainspring is wound by lifting the D-ring on the case back. This impressive timepiece features a maximum power reserve of five days. Time-setting is just as simple.

The clarity and symmetry of the Boba Fett-inspired Tourbillon dial belies the complexity of its manual-wound central tourbillon movement. It is composed of 220 parts. Lastly, each of the ten numbered timepieces was designed and assembled within the Kross Studio atelier in Gland, Switzerland.

We hope you enjoy reading about the incredible Boba Fett-inspired tourbillon luxury watch. If you are a Star Wars fan and avid watch collector, this collectible timepiece is for you.