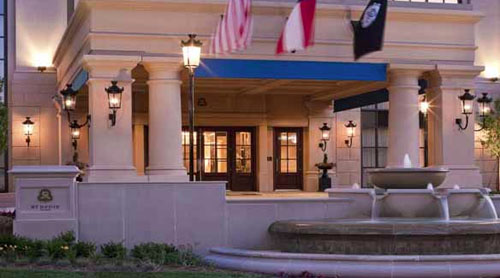 The most anticipated movie in April, and perhaps the entire spring season, is James Cameron’s re-release of the blockbuster movie, Titanic, in 3D.  15 years since it was first introduced to the world, and on the centennial of the sinking of the RMS Titanic, St. Regis Atlanta hotel is paying tribute to the ship.

Namely, the prestigious, luxury St. Regis hotel is honoring its founder, Colonel John Jacob Astor IV, who was on board the RMS Titanic at the time of the sinking.

Known for its luxurious accommodations, spacious rooms, and fit-for-a-royal amenities, the St. Regis Hotels’ reputation spans worldwide.  This special celebration of its founder and commemoration of world’s most famous ship are done in the same royal fashion as all of its high profile events.

This exclusive commemoration event begins with the Centennial Signature Cocktail.  Throughout the month of April, the St. Regis Atlanta Bar will serve an exclusive signature cocktail, The Centennial.  This cocktail is concocted with 1912 Madeira Verdelho Reserva, Domaine de Canton ginger liquor, Krug Rosé Champagne, and Breckenridge Bourbon to honor Colonel John Jacob Astor IV who fought with General Breckenridge in the Spanish-American War.

This indulgent cocktail is garnished with an edible orchid, which was the favorite flower of Caroline Astor, mother of John Jacob Astor IV.  The cocktail includes a commemorative St. Regis champagne coupe.

The event continues with Titanic-inspired hors d’oeuvres and entrees created by St. Regis’ Executive Chef Joseph Trevino.  All of which were inspired by the menu served aboard the Titanic, and are available at Paces 88 American Bistro.

A commemorative event will not be complete without the proper suitable accommodations.  For all of April, St. Regis Atlanta will also offer an exclusive room package, which includes the Empire Suite for $3,300, the same price of the deluxe parlor suite aboard the Titanic.

On April 10, the day that the Titanic departed Southhampton in 1912, St. Regis Atlanta’s Sommelier and Wine Director, Harry Constantinescu will saber 100 bottles of Heidsieck champagne, the same label that was, you guessed it, served on board the Titanic.  The complimentary “100 years & 100 bottles” cocktail reception is open to all guests and will be held from 6-8pm in the Astor Ballroom.  It will also feature passed champagne, specialty cocktails, and hors d’oeuvres inspired by the last dinner aboard the Titanic.

Finally, as a tribute to James Cameron’s movie, Guernsey’s Auctioneers & Brokers in New York will auction off more than 5,000 Titanic artifacts on April 1.  Undoubtedly, St. Regis Atlanta offers the most complete Titanic experience this spring.